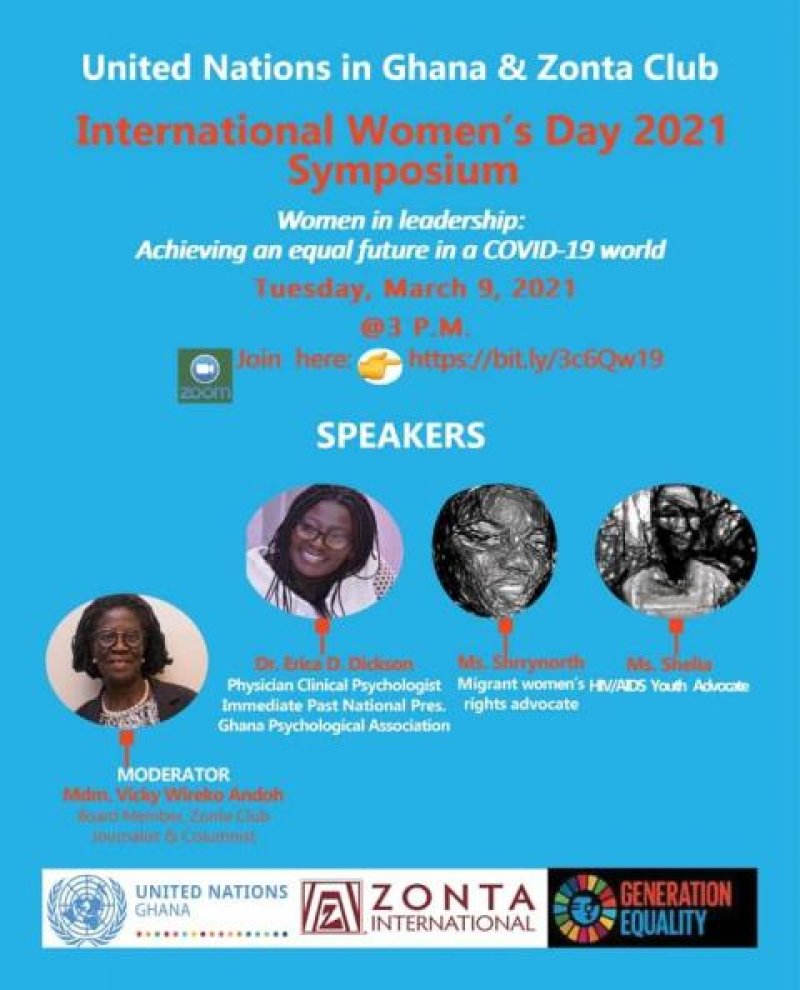 The Zonta Club in partnership with the UN, has called on Africans and the world at large to challenge the happenings that are unfavourable and unfair to women and advocate equality and freedom for them.

Such unfair status quo include; cultural practices of girl child marriage, female genital mutilation, domestic and sexual violence, witchcraft accusation and lynching in the society.
Mrs Florence Ohene-Kyei, the President, Zonta Club of Accra together with other partners made the call when they joined the rest of the world to celebrate the 2021 ‘International Women’s Day’.
She said the Club as part of the celebration renewed its commitment to champion the rights of women and girls in communities especially in Africa and chose to challenge their political and traditional leadership to address the issues of concern.
Last year, she said the COVID -19 pandemic shed light on existing issues and the disproportionate effect on women and girls.
Amongst them were subjection to violence by an intimate partner as security, health and money concerns intensified and tensions were amplified by cramped and confined living conditions.
Moreover, girls in emergencies were disadvantaged at all stages of education; she said, adding that UNICEF estimated that by 2030 one in five girls in crisis-affected countries would not be able to read a simple sentence.
The global economy was experiencing its worst downturn since the Great Depression and had led to more job losses among women than men, Mrs Ohene-Kyei said.
The Zonta Club’s President said the attention on the issues had brought much-needed awareness to the challenges facing women and girls and would hopefully reinvigorate the fight for gender equality.
“The pandemic has also highlighted the many women who stand on the frontlines as health care workers, teachers, care-givers innovators and more. Women and girls around the world have made immense efforts to secure an equal future and recovery from COVID-19, and their contributions do go unnoticed,” she lamented.
Mrs Jennifer Asuako, Programme Analyst, Gender & Human Rights, United Nations Development Programme, said about 65 percent of frontline health workers attending to COVID-19 patients were females and as at November 2020, more than 2,000 health personnel in Ghana had contracted the virus, thereby putting the lives of their families at risk.
She reiterated that women were affected at every sector of the economy in the wake of the pandemic ranging from education, where schools were closed, financial institutions, borders that were closed to business women and men, non-food shops that were closed and women who worked at hotels that were closed down.
Teenage pregnancies increased among young girls who are vulnerable and had nothing to do at home when schools were closed down, she said, adding that there were also potential increases in human trafficking and child marriages.
Mrs Asuako said if the world, did not address the consequences of the impact of COVID-19 on women and girls, they would have long-term effects and the gender inequality gap would widen.
Dr Adwoa Twum-Barimah, National Consultant, National AIDS/STI Control Programme, said Ghana had slowly made steadily progress with HIV response and out of the persons living with HIV in Ghana, 58 per cent knew their status, 45 percent were on antiretroviral drugs, and 35 per cent were on treatment and had their viruses depressed.
In 2018, she said almost 20,000 people contracted HIV out of which 83 per cent were adults, with 17 per cent children. Out of the total number, 78 percent were females.
This, she said, showed how vulnerable women were and called on all women to stand tall to fight for equality and fight harder to attain their dreams no matter the circumstance.
Ms Priscilla Ama Addo, President of the Young Health Advocates (YHAG), an association of young people living with HIV and AIDS in Ghana, said life during COVID-19 was stressful to them, especially as they struggled to access medical care and advice during the lockdown period.
Their usual supply of antiretroviral drugs for four to six months reduced drastically to about two weeks, she said, adding that they also faced nutritional changes as many of their parents were not going to work during the lockdown period.
SOURCE: GNA
United NationsZonta Club