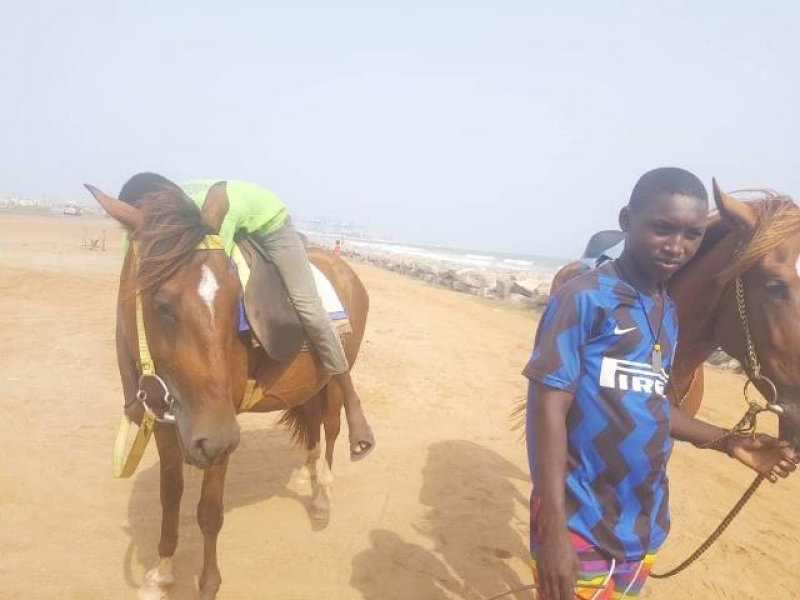 “Boss let the kids take a picture on the back of my horse, it’s just GH¢5.00”, this is how revelers at the Titanic Beach at Sakumono in the Tema West Municipality were enticed by young boys engaged in horseback riding business.

The longer time one spends at the beach determines the number of times you would be approached by guys as they try to coerce children, parents, couples among others to mount their horses back either for picture taking or a short ride at the beach.
Horse riding is one of the entertainment avenues revelers rely on when they visit the beach at Sakumono.
The Titanic Beach can also boast of a number of spots lined along the beach, its beautiful scenery attracts people who often take pictures including weddings on the marble rocks neatly arranged at the shore serving as a sea defense while having a view of the harbour, beach road, rail line, and the ramsar site.
Speaking to the GNA Entertainment, some young men who engaged in the business of horse riding at the beach said they made an average of GH¢200.00 on holidays, and weekends.
Sixteen-year-old Joseph, told the GNA that on a bad day, he could make a total of GH¢100.00 between 10:00 and 18:00 hours making it a lucrative business.
He disclosed that the shut down by President Nana Addo Dankwa Akufo-Addo as part of the COVID-19 measures did not affect their business as people still visited the place for relaxation.
According to him, about ten horses were being used for the business at the Titanic Beach indicating that he got into the business after following his friends for some time in the trade.
On how they get their customers he said “we sometimes approach revelers and some also ask for our services”.
Jerry on his part reiterated that the horse riding business was good and one only had to purchase the horse and put it in the care of stable operators at Mexico in Tema Community two.
Master Lowell Kwabla Nartey, seven years old, who patronized the horse riding services said he had been at the back of the horse twice revealing that he was scared the first time which was only to take a picture, but really enjoyed riding on it the second time he tried.
SOURCE: GNA
SakumonoTema West Municipality
You might also like
News