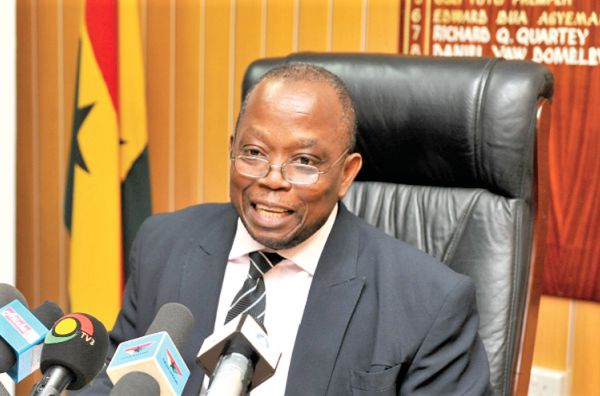 You do not have the mandate to investigate me – AG Domelevo calls EOCO’s bluff.

Auditor General, Daniel Domelevo, has written to the Economic and Organised Crime Office (EOCO) asking it to stop investigating his office for alleged procurement breaches at the Ghana Audit Service because it does not lie within its remit to conduct such probes.

In the strongly worded letter dated November 18, 2019, addressed to the Acting Executive Director of EOCO, COP Frank Adu-Poku (Rtd), the outspoken Auditor General wants EOCO to with immediate effect, cease what he describes as an unlawful investigation into allegations that himself and the Ghana Audit Service breached the law when some vehicles were procured in 2018.

“Your office does not have the jurisdiction to investigate corruption-related offences which has been defined in Act 959 to include breaches of the Public Procurement Act,” the letter said in part.

Together with his Deputy in charge of Finance and Administration, Mrs Roberta Assiamah-Appiah, and the Audit Service Board, Mr. Domelevo has been accused of circumventing the procurement laws to procure some vehicles for the Audit Service.

A petition by a private citizen to EOCO alleged that the Audit Service had among other things, breached the Procurement Law, Act 663 in the procurement of vehicles worth almost GH¢6.2 million.

The petitioner requested EOCO to investigate and subsequently make a determination of whether proper procedures were followed by the Entity Tender Committee (ETC) in procuring the vehicles and recommend appropriate sanctions in accordance with the Public Procurement Act, Act 663 where necessary.

Since November, Mr. Domelevo has written a statement of defense to the EOCO.

However in the latest twist to the saga, Mr. Domelevo while stating his and his staff’s readiness to submit themselves to investigations by the appropriate body, would not submit to EOCO as it lacks legal authority to continue further investigations into any of the alleged procurement breaches.

“I am by this letter asking you and your office to immediately stop the illegal and unlawful investigation of the alleged procurement breach and render an unqualified apology to me and Staff of the Ghana Audit Service within five (5) working days from the date of receiving this letter”  the letter stated.

“Unless and until EOCO is able to show clearly where it is deriving its mandate and jurisdiction in the matter is coming from, any continued or further investigation by your office after the receipt of this letter will be fiercely contested” the letter further stated.

“In fact, I am advised that the relevant provision in Act 959 which amended Act 804 is section 80 and therein, your office’s mandate to investigate corruption and corruption related offenses, which has been defined to include procurement breaches, has been taken away.  This clearly means that your office does not have the jurisdiction to investigate corruption related offences which has been defined in Act 959 to include breaches of the Public Procurement Act” the letter added.

“It is quite bizarre and unfathomable why your office would purport to be investigating procurement breaches when and in fact it does not have any legal authority to do so unless there is any hidden or ill motives behind your actions” the letter concluded.