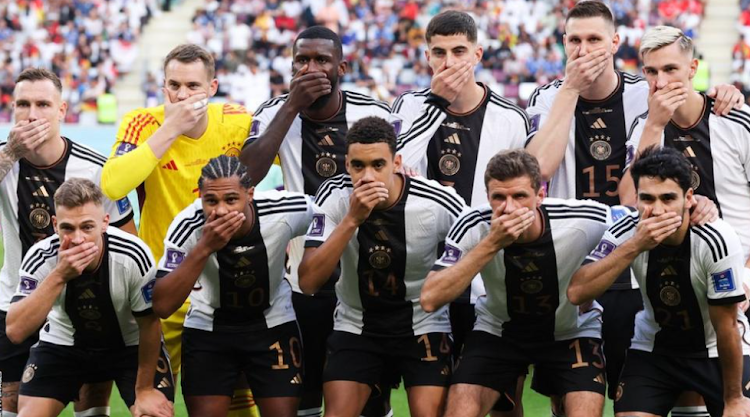 Germany players covered their mouths during the team photograph before their World Cup opener against Japan “to convey the message that Fifa is silencing” teams, says Hansi Flick.

The gesture follows Fifa threatening players with a booking for wearing the OneLove armband during games in Qatar.

The captains of seven European nations were set to wear it to promote diversity and inclusion.

Germany head coach Flick said it was a “sign” from his team.

The Germany football federation (DFB) said on Twitter: “It wasn’t about making a political statement.

“Human rights are non-negotiable. That should be taken for granted, but it still isn’t the case. That’s why this message is so important to us.

“Denying us the armband is the same as denying us a voice. We stand by our position.”

Germany had planned to wear the OneLove armband, along with England, Wales, Belgium, Denmark, the Netherlands and Switzerland.

Fifa has brought forward its own ‘No Discrimination’ campaign, which had been due to start from the quarter-finals.

Captains will now be permitted to wear a No Discrimination armband for the duration of the tournament.

“We wanted to use our captain’s armband to take a stand for values that we hold in the Germany national team: diversity and mutual respect,” added the DFB.

“Together with other nations, we wanted our voice to be heard.”

The DFB says it is investigating whether Fifa’s threat to sanction players for wearing the armband is legal.

“Fifa has forbidden us from using a symbol of diversity and human rights,” said DFB media director Steffen Simon.

“They combined this with massive threats of sporting sanctions without specifying them.

“The DFB is checking whether this action by Fifa was legal.”