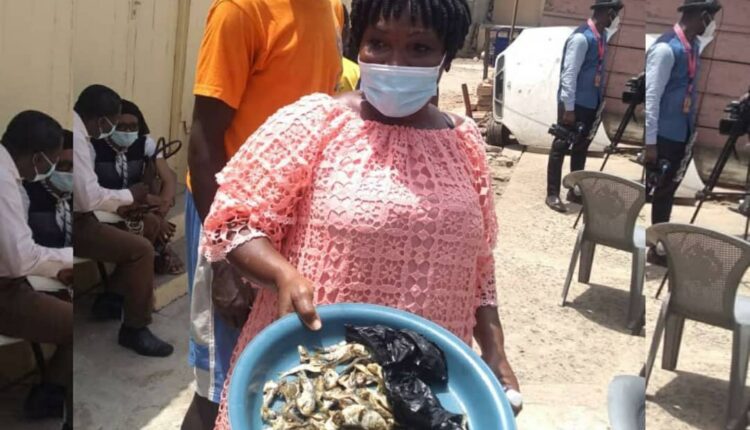 Madam Mercy Nortey, a resident of Osu Anohor in the Korley Klottey Municipality of the Greater Accra Region, has confessed to eating some of the dead fishes washed ashore over the weekend.

She said someone sold them to her on Good Friday, April 2, but upon discovering that they were among the dead fishes washed ashore, she drank red palm oil, to dilute any potential poison that might be contained in the fish.

Madam Nortey made the disclosure when Madam Mavis Hawa Koomson, the Minister of Fisheries and Aquaculture Development, led a delegation to Osu Anohor, a suburb of Accra, to interact with the Chief Fisherman of Osu Alata, Nii Djamlodja, and some residents in the area.

Madam Nortey said although she experienced stomach upset and visited the toilet several times, she discounted the effect of the fish she ate and rather blamed the palm oil she took afterward.

They interacted with the residents in the area and explained efforts being made by the government to unravel the cause(s) of the situation.

The Sector Minister said although samples of the dead fishes had been taken for laboratory test, her outfit had also constituted an Inter-Agency Committee, comprising officials from the Fisheries Commission, Environmental Protection Agency, Food and Drugs Authority, and Marine Police to investigate the cause(s) of the situation.

She appealed to those who had eaten some of the dead fishes to voluntarily own up so that health officials could monitor them to avert any eventuality.

She asked those who had already sold the fishes on the open market to withdraw them to enable the EPA and FDA officials to dispose of them safely.

Ghanaians woke up to the news of scores of dead fishes washed ashore on Good Friday, April 2, at Osu in the Greater Accra Region and Axim in the Western Region respectively.

Some residents in those communities allegedly took the fishes and sold them to unsuspecting persons while others used them to prepare meals for consumption.

The Marine Police Unit got wind of the situation and managed to seize some of the dead fishes for destruction while FDA had taken samples for laboratory tests.

Madam Delese Mimi Darko, the CEO of FDA, had given the assurance the result of the laboratory test would be made public.