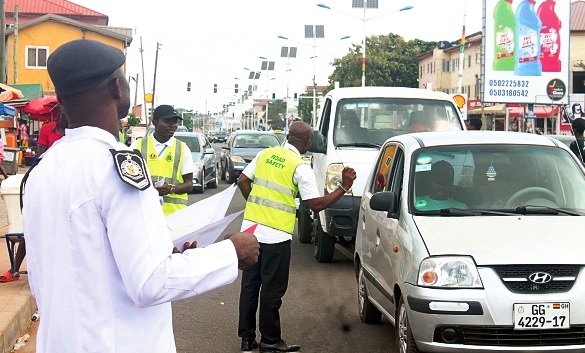 Police officers and other law enforcement personnel managing various barriers, borders and axle load terminals in the transit trade have been reminded of their mandate to promote safety and security on the roads.

They are also to enforce the 2012 traffic regulations, become abreast with all Police procedures in traffic Management and regulations, and avoid any breach of the Human Rights and responsibilities required by the Law.

Chief Superintendent Dr Sasu Mensah, the National Director of the Motor Traffic and Transport Department of the Ghana Police Service told Police officers at a sensitization workshop organised by the Ghana Shipper’s Authority in Takoradi. He said Police Officers were mandated to provide absolute security in particular for traders who transported goods to landlocked countries or peasant farmers bringing their goods from the hinterlands from activities of armed robbers and other miscreants who ply their nefarious businesses on the road to the detriment of these road users.

Chief Superintendent Dr Mensah, therefore, encouraged them to discharge these tasks diligently and in a more friendly manner to avoid bad taglines from the public and also gain their trust and confidence to help in service delivery.

While the Western Region is cardinal in the transit trade, it had become so imperative to engage law enforcement personnel to appreciate the sector’s contribution to the national economy and the need to avoid delays among other conducts that did not go well for a smooth trade.

Ms Benonita Bismarck, the Chief Executive Officer of the Ghana Shipper’s Authority said a study showed that the transit trade sector accrued GHS 136 million to the Ghanaian economy and thus the need to protect the sector to yield more revenues for the state.

However, many road governance challenges involved in transit truck drivers and key state actors such as the Police MTTD, Customs, Ghana Highway Authority and others called for more engagement and collaboration to smoothen the tie and enable the country to demand maximum benefits.

The Western Regional Police Commander, DCOP Victor Adusah Poku said the training would enhance the capacity of the Traffic and Highways Police officers and help them to appreciate their role to provide security and promote the transit trade.

He said Police Professionalism and accountability had become topmost priorities and encouraged the men to be worthy ambassadors of the service adding, “avoid acts that will undermine the image of the Ghana Police Service.