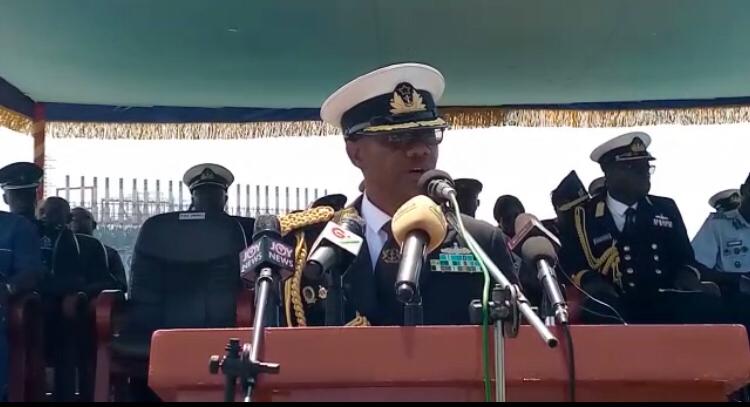 The Western Naval Command in the Sekondi-Takoradi Metropolis on Wednesday 14th September 2022 held a short solemn memorial service at the Sekondi Naval Base in remembrance of personnel of the Ghana Navy who died during the Liberian Civil War about 32 years ago.

The event was to remember and honour the memory of the naval officers who lost their lives in the line of duty during the infamous shelling of Ghana Navy Ship (GNS) YOGAGA in Liberia on September 14, 1990.

You will recall that during the war in Liberia, a group of West African Nations under the auspices of ECOWAS took unprecedented steps of sending peacekeeping forces to Monrovia in August 1990.

In view of this, the Ghana Armed Forces provided the first Commander, General Arnold Quainoe and the Ghana Navy contributed 2 ships namely GNS ACHIMOTA and GNS YOGAGA as part of the task force.

Addressing the dignitaries and naval officers on behalf of the chief of Naval Staff REAR ADMIRAL I. A YAKUBU, Flag Officer Commanding, Western Naval Command COMMODORE SAMUEL WALKER said the gathering was to remember, honour, and pay gratitude to their fallen heroes who served the colours and paid the ultimate price, including the two who lost their lives in their effort to restore peace in Liberia.

The Western Regional Minister, Kwabena Okyere Darko-Mensah indicated that the Government of Ghana pledges to continue to do everything in its power to provide the needed logistics and tools necessary for the achievement of the goals of the Ghana Navy.