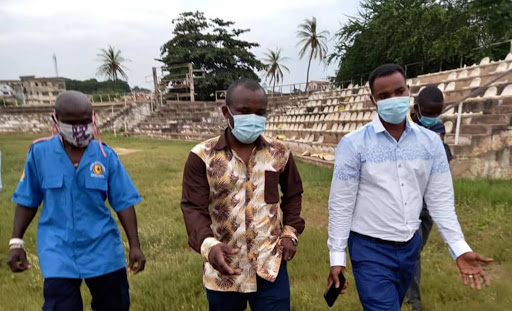 There was a time in Ghana when football in the Western Region was almost a tourist attraction. The buzz and euphoria created by Sekondi Hasaacas SC and Sekondi Eleven Wise FC radiated the entire country and blossomed the football economy in the whole of the West Coast of Ghana. Both teams were trailblazers in the Sekondi-Takoradi metropolis, with some magnetic attraction that was not only infectious and but dreadful! Gyandu Park was the guillotine.

The Nana Gyandu Park, a beehive, the action spot, which hosted two great clubs was in good state and very fit for purpose. Fans trooped in and trickled through the gates of the famous Gyandu Park in far huge numbers than was expected for any game of any magnitude. A local derby was like a national durbar, a super clash, which could rival any known derby on the African Continent! The fun, the fever and the frenzy at the dreaded Gyandu Park was electrifying, and the nostalgia, so chilling and awesome! In fact, the rapturous response of Hasaacas SC fans ‘dooooooooo!!, heavy!!, heavy’!!, the swag with that chant of Eleven Wise FC ‘showshoooooow’!, were so unique and deafening.  Indeed, there was no dull moment at the Sekondi Gyandu Park!  That is a West-Side Legacy!!

Those were days when players from Sekondi-Takoradi towered and dominated the Black Stars, not just as invitees but game starters! Indeed, the high point of the Ghana’s supremacy and dominance in African football was partly when the Western Show Boys and the Giant of the West were the feeders to the Black Stars. Joseph Carr, Charles Kwame Sampson, John Baker, John “Zion Train” Essien, Emmanuel Quarshie (captain), Windsor Kofi Abbrey, Isaac Paha, John Bannerman were all in the last Black stars that won the cup in 1982. Prior to that in 1978, John Nketsia Yawson, Isaac Paha, Justice Moore (Sekondi Eleven Wise FC), James Kuuku Dadzie, Emmanuel Quarshie, Joe Carr (Sekondi Hasaacas FC), from the West, had beaten Uganda in the final to win the African Cup for the third time. All these powerhouses, including Augustine Arhinful, Stephen Baidoo, George Blay, George Owu, Joe Hendricks, John Antwi, Samuel Inkoom, Ebenezer Assifuah etc. are products of the Nana Gyandu Park. That’s the West-Side Legacy!!

Today, the Gyandu Park has lost the glitz, the glamour and the glory to years of neglect. Sekondi Hasaacas SC and Sekondi Eleven Wise FC are now in a baby stage of what looks like a promising re-organisation. The football economy in Sekondi is not that vibrant, to be charitable.

How come we could not consolidate on past successes of football in the Sekondi Takoradi metropolis? How did we travel this path of collapse in the football space? Our passage to close extinction on the football field and the national conversations started when we decided to let the Gyandu Park facilities go waste away.

The political gimmickry and stratagem about the Gyandu Park.

The Gyandu Park is now a heartbreak, a tragedy for political razzmatazz and gimmickry. Here are few of those:

“Gyandu Park is to be renovated into a modern stadium with facilities for all manner of events” (Source: Ghanaweb Soccer News)

“I believe in the private sector participation in the country’s sports development, government is fully committed, and I can assure you that we will fix the Gyandu Park and deal with the electricity challenges at Sekondi Stadium”. (Source: newsghana.com.gh)

“The Western region which has produced some of Ghana’s best ever sports men and women and therefore deserves better in terms of sports facilities than presently on the ground, the maintenance culture of our people have not been good, and, this must change, and we will give  Gyandu Park, a priority attention” Nii Lantey Vanderpuye told Kumasi based radio Station, Nhyira FM (source: Ghanaweb Soccer News)

“My visit to Gyandu Park today revealed decay of the stadium which has been neglected for nearly three decades, government and development partners in sports will urgently consider its renovation.” (Source: www.graphic.com.gh)

“It’s not here {Nkawkaw} alone that we are going to reconstruct, from here we are moving to known facilities like the Gyandu Park, Kpando, and the rest”. (sportsworldghana.com)

From the corridors of power, Gyandu has been mentioned to be next big thing again. In 2007, Government invested in Sekondi Sports Stadium; Gyandu Park was supposed to be the next but nothing happened. Thirteen years on, another regime passed by, nothing happened. We have seen the terrible decay and the deterioration of the facility. We can only wait and see if this time, it would not be the recycled talk shop.

Leveraging on the investments in the Sekondi Sports Stadium

The Sekondi Sports Stadium in Essipon is being refurbished now, but it is my view that our generation has failed football in the Sekondi Takoradi Metropolis, even after government invested in that huge project for the 2008 AFCON. We have failed to put up the right attitude and direct investment in our traditional clubs to fully leverage the opportunities offered by the Sekondi Sports Stadium. The clubs lacked sustainability framework that was to outline and direct the commitment of our traditional clubs to practices and standards designed to promote their future business operations. The rest is history.

Today, the story has changed. Private capital has gone into new clubs like Karela FC, Medeama SC and the Skyy FC and by extension, Elmina Sharks FC, Dreams FC etc.  – even without the support base Hasaacas SC and Eleven Wise can boast of.  Medeama SC announced a $300,000 per year sponsorship from Goldfields, and it has taken years of private sole sponsorship of Moses Armah to make the Tarkwa club an attractive and a credible brand. At Ainyanse, Karela FC after years of personal investments now enjoys decent sponsorship from GNPC Foundation and Ghana Gas. At Daboase in Wassa East, Skyy FC is being sponsored by Skyy Media Group and supported by PSG, with Golden Star Resource Wassa Mines expected to announce a package with the club. Fact is that football clubs are now composite businesses and are intrinsically concerned with financial investments.

Some leading captains of business then invested to make Hasaacas and Wise what they were years ago, and the legacy they represent today. The distinguishing works of Mr. Edward Alexander Nartey, and Mr. John Ackah Blay-Miezah for Hasaacas SC and Eleven Wise FC respectively come to mind, but fact is, that cash philanthropy is hard to come by today, in fact it is a thing of the past. Football is now cash business, and investors would want to see returns or preserve their capital. That is the paradigm shift now.

The politics of supporters’ role and club organogram

The politics of vituperation, vilification, vendetta and vindictiveness orchestrated by parasites of the status quo, against persons and groups who invested in these traditional teams has been the most self-inflicted enemy. The needless agitations where ‘supporters’ want to be in charge of the direct management of Sekondi Hasaacas and Sekondi Eleven Wise by force, has beyond time, proven to be unyielding.  The era of rented journalism that engaged in vicious and diabolic reportage was so unfortunate. In fact, we all owe our community football clubs some social responsibility.

Can you envisage Barcelona FC, Manchester United, Arsenal FC or Liverpool FC being managed and funded by supporters? Business and passions are said not to be mixed; yes, football is emotion, but to be successful in the football business, it is crucial to put emotions aside and focus on the goal of the investment. The passion of the supporter is important but financial investment is paramount.

Supporters of both Hasaacas SC and Eleven Wise FC are clients or devoted customers of the business enterprise (the club), and they ought to play their role as such. That role is to patronize their club – buy tickets to watch matches, buy merchandise and contribute money in other means. But when supporters assume the management and control of a football enterprise, expect chaos which affects everything around them including stadia and parks.

Structures and role-play are the way to go. The two Sekondi clubs must refocus on getting their supporters back into the stands where they belong and get resourceful and passionate investors and managers to assume the business management of these great clubs.

As a cash business, the football economy in the Western Region has been affected by economic circumstances of both Sekondi Hasaacas SC and Eleven Wise FC, and even the average clubs who were supplying players to both clubs. There are internal devaluations, and player export is close to zero.

It is hoped that things would get better and brighter. Adieu!