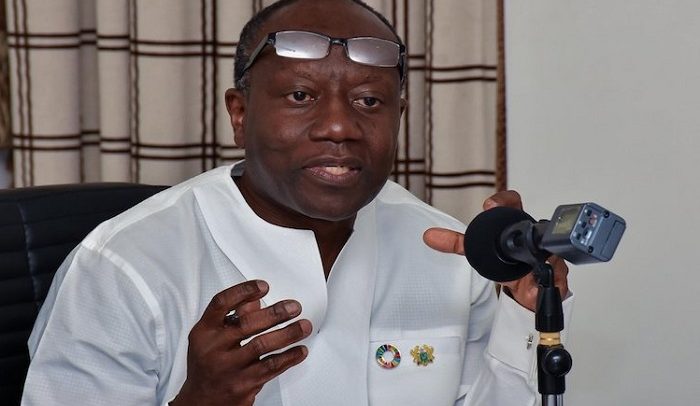 Finance Minister, Kenneth Ofori Atta has disclosed that the previous administration led by former President John Dramani Mahama left a distressing ‘legacy of financial enslavement’, which had overwhelmed the coffers of the current administration under President Nana Addo Dankwa Akufo-Addo. This, he explained resulted from the poor management of the financial sector.

In his briefing on the Mid-Year Budget in parliament today, Mr. Ofori Atta indicated that the nation has had to bear the brunt of the collapsed financial institutions following a clean-up of the sector by government. He stressed that a cumulative amount of 21.6 billion Cedis have been spent through a strategic reformation of the financial sector.

Mr. Ofori Atta remarked whiles referencing Prof. Adu Boahen on his book on slavery that; “this is a legacy of financial enslavement from the previous administration.”

“…and that Mr. Speaker, per Prof. Adu Boahen is a crime and mitigated by any extenuating factors.”

These expenses he mentioned constitute a 13.6 billion, that was spent on the resolution of failed banks, specialized deposit taking institutions, financial institutions, establishment of Consolidated Bank of Ghana Limited, and the capitalization of the Ghana Amalgamated Trust.

“Mr. Speaker, additionally with the President’s directives to fully pay all depositors whose funds were locked up in the failed FDIs and MFIs, an amount of 5 billion was spent. This brings a total expenditure on financial sector intervention as at June 2020 to 18.6 billion, 4.8 percent of GDP. Government has also committed an amount of 3.1 billion, 0.78 percent of GDP towards supporting investors in failed Assets Management Companies regulated by the SEC. Mr. Speaker, this will bring the overall total government expenditure for the failed Financial Institutions to 21.6 billion, 5.6 percent of GDP.” he added