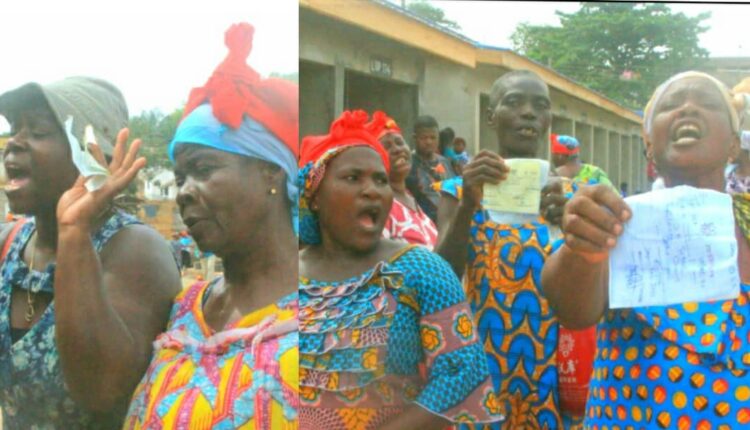 Traders of the Takoradi Market Circle are complaining about treatment meted out to them by the Sekondi-Takoradi Metropolitan Assembly (STMA) concerning their relocation to the new market.

Some of the traders are complaining of lack of space at the new market which some also claimed they paid an amount of GHS400 which was demanded by the authorities before a space is granted but are yet to be issued any.

Skyy Power 93.5Fm’s Nana Yaw Kumi revealed more than 200 traders are stranded at the new market as every where is occupied with no space for some to trade.

Speaking to some of the traders at the new market, they proved evidence of payment through a receipt which was issued to them and made it known they have been neglected with non of the city authorities coming to their aid.

However, the trader also indicated the authorities are unavailable to confront because they come to the new market at around 1:00 am to demarcate spaces for other traders. In that case, they are no where to be found in the morning when the chaos and misunderstanding among the traders is at it peak.

Also, they revealed some traders who are not originally from the Takoradi Market Circle have paid some amount of money to the authorities and have been granted trading spaces and stores which is one of the factors leading to the neglect of the original traders at the market.

The Western Regional Minister, Dr. Kwabena Okyere Darko-Mensah speaking on Skyy Power 93.5Fm addressed the traders to be calm as they are working very hard to allocate spaces to each and every one of them at the new market.

He said the effort they are putting will make sure all the traders are sorted out. Also, he responded to allegations by some traders claiming spaces and stores have been issued to some people who are not original traders of the market at the new market by saying, he will make sure spaces and stores granted to these people will be reclaimed and given to original traders.

Video of some aggrieved traders: