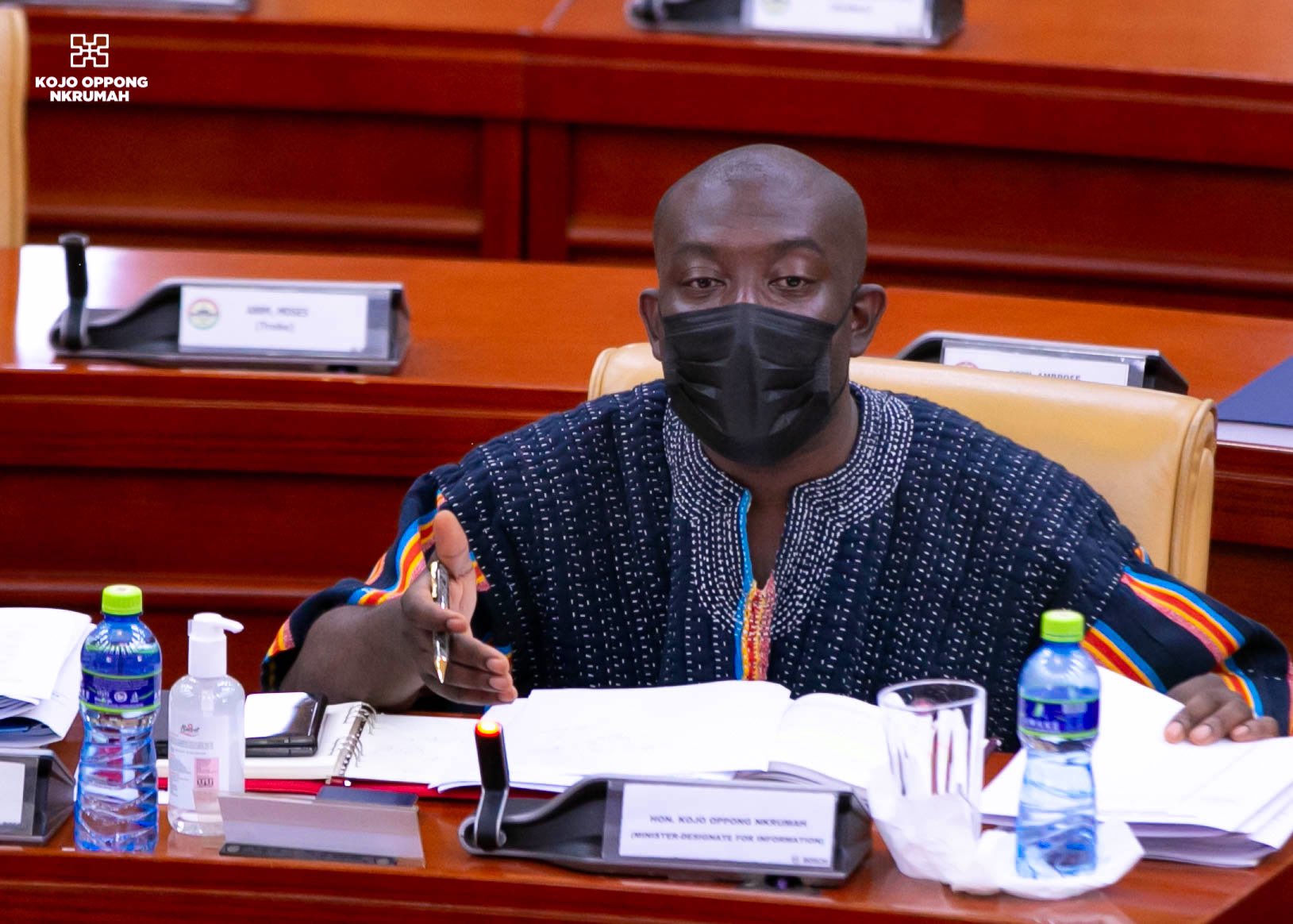 We need to protect the media – Kojo Oppong Nkrumah

Information Minister Designate Kojo Oppong Nkrumah has underscored the need to protect the media because “they provide the sunlight that helps democracy.”

Mr Nkrumah did not accept a suggestion from a member of the Appointments Committee that the Akufo-Addo Government is harassing the media.

The former broadcaster, re-nominated by President Akufo-Addo, to serve at the Minister of Information, at the beginning of his second term, stressed the need to protect the media and media practitioners, during his vetting by the Appointments Committee of Parliament, at the Parliament House in Osu- Accra.

The work of the Appointments Committee of Parliament, currently chaired by Mr Joseph Osei-Owusu, the First Deputy Speaker of Parliament and MP for Bekwai, is based on the 1992 Constitution and the Standing Orders of Parliament.

The Committee recommends to Parliament for approval or persons nominated by President for appointment as Minister of State, Deputy Minister, Members of Council of State, the Chief Justice and other Justices of the Supreme Court and any other persons specified under the Constitution or under any other enactment.

During his vetting, the Information Minister Designate, who is also the MP for the Ofoase Ayirebi, said the administration of President Akufo-Addo, had not in any way harassed or penalized editors for their editorial opinions.

Rather, the Government has complied, against complaints from certain sections, with provisions that protect the media and would expand the frontiers of press freedom.

Mr Nkrumah answered questions on attacks on journalists, and said the shutting down of some radio stations, which was perceived as attack on the media, was not the case.

In May 2019,, the National Communications Authority (NCA), the broadcasting and telecommunication frequency regulator in Ghana, shut down Radio Gold and Radio XYZ, both based in Accra which are aligned to the main opposition party, the National Democratic Congress (NDC).

But the Minister Designate explained that that those stations were not closed down to demand license to operate, but were shut down because their authorization that granted them spectrum had expired.

The matter went to the National Communications Tribunal which ruled against the stations.“We encouraged them to reapply,” the Information Miniter Designate said.

On attacks on Ghanaian journalists, Mr Nkrumah stated that there is a need to validate any report of attack to establish the journalists was attacked in the line of duty.

Such validation, he said would ensure a proper follow-up and investigation.

He informed the Committee that he was in communication with the Interior Minister on the investigation into the death of undercover journalist Ahmed Hussein Suale.

The Minister made a strong case for continuous existence of the Information Ministry, and explained that the work of the sector Minister was different from that of the President’s Press Secretary.

Whereas the Press Secretary focused on activities of the Office of the President, there is the need for free flow of available information from the Government to the people to help the running of the country’s democracy.

“The Government must have an opportunity to update the people on its activities,” “the Minister Designate said, adding that the Goal 16 of the Sustainable Development Goals stressed strong institutions, for which there must be strong information machinery.

“You need a bigger machinery to channel information to the Government Ministries, Departments and Agencies,” the Minister Designate said.