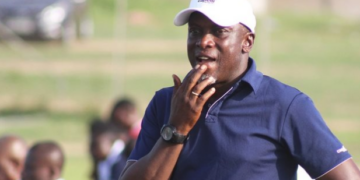 We need to keep focus despite win” – Hearts coach

Samuel Nii Noi Interim Head Coach of Accra Hearts of Oak has called for the need to keep focus despite wrangling within the top hierarchy of the club.

It has been a tumultuous past few days for the Phobians but they were able to secure a crucial 3-2 victory against Ebusua Dwarfs in a match-day15 encounter played at the Accra Sports Stadium on Sunday.

A late gasp goal from Isaac Mensah was enough to secure all three points for the Phobians ahead of the mid-week encounter against Liberty Professionals.

“It was a collective effort from the board, management, and playing body which earned us the win but we still need to keep focus,” coach Nii Noi said in a post-match press conference.

Hearts striker Victor Aidoo who was adjudged Man of the Match after scoring two goals from the penalty spot in a post-match presser said that, “So many things has happened in our team over the past few days, but we were not focused on the happenings around the club but we were determined to secure this win which was very difficult”.

Hearts would face off against Liberty Professionals on Wednesday with their “Super Clash” against arch-rivals Kotoko set for next Sunday.