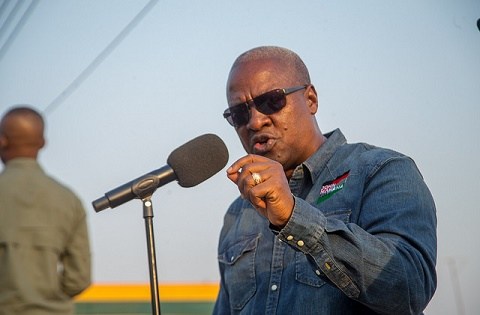 Former President John Mahama has lashed at the Supreme Court over the ruling it gave on the legal action filed by the National Democratic Congress, against the Electoral Commission and the Attorney General. The former President in a press conference this evening, registered the party’s displeasure with the ruling.

He said;”we are deeply disappointed and we strongly disagree with the court over this outcome which has confounded many legal experts and indeed has thrown the whole country into a state of confusion. Our legal team is examining this decision even as we await the full reasons for this judgement. It is also worrying that the court deferred the reasons for it decision to the 15th July. A date by which time the EC would have been two weeks into the said registration exercise”

John Mahama argued that the NDC has in history and today remains a democratic organisation that respects the rights of the people, and thus offers a more inclusive governance that any other in the country.

“Throughout its history, the NDC has stood firmly for an inclusive democracy. That is because our party is built on the principle that no one should be left out in the governance process of Ghana” he noted.

Reacting further to the ruling by the Supreme Court, Mr. Mahama accused the ruling government of manipulating the electoral process through a rather ‘independent institution of the EC’, all in an attempt to retain political power. He described the Nana Addo led government as being desperate in wining election.

“This represent the handy work of a desperate incumbent, that on an account on its poor performance in government sees its political survival only through the prism of the manipulation of an electoral process to exclude a section of Ghanaians who they suspect may not renew their mandate at the polls” he said.

Mr. Mahama remarked that government has been irresponsible, considering the risk of exposing the citizenry to the novel coronavirus with this voter registration exercise.

“A caring, compassionate and responsible government will not push us at the brink at a time of major pandemic such as COVID-19 that is causing some much anguish among our citizens. It is deeply regrettable that the electoral commission which should independent and have carved a niche for itself as a respected commission in the whole of Africa has today made itself a willing tool in the execution of this most diabolic agenda”