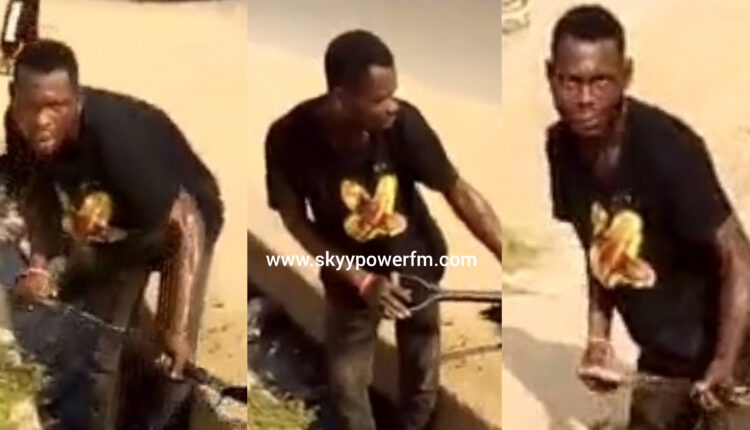 An alleged thief who was captured in Kwesimintsim Quarters near Grand Plaza has been subjected to communal labour by residents in the area.

The alleged thief was captured on Tuesday, January 18, at about 9:00 AM when he was trying to sneak inside the room of a female resident who was not home at that particular moment.

However, a resident spotted him trying to sneak in and alerted others who rushed and captured him.

The Kwesimintsim Quarters is notoriously known for burglars and thieves which a 20-year-old woman who goes by the name of Augustina Andrews, was stabbed several times over the refusal to hand over her Tecno phone.

Agustina explaining her sad experience to Skyy Power 93.5FM noted that she is a resident of Kwesimintsim Quarters, which on her way home on Sunday, January 9, was attacked.

Although she had been warned by her siblings not to use the route she had the experience, because of no street lights, she thought it wise to do so because it is a shortcut and was starving as she could not wait to get home and eat something.

However, since there are no lights, she used her phone’s flashlight for visibility which alerted the alleged thief, making him follow her stealthily.

“As I switched on my flashlight, I saw a male following me but looking at the way he was walking, he did not look suspicious so I carried on carelessly.

“My concentration was also on my phone because I wanted to make a call and before I raised up my head to see ahead, he was in front of me demanding the phone.

“I was shocked and handed over the phone to him, while I was doing that I was taking some steps back and slipped, in the process of me falling, I held his dress and we both fell down. He then thought I was going to struggle with him so he got up and stabbed me on both arms and leg with a knife.”

Augustina indicated she was discovered by some neighbours in a pool of blood as they helped and transported her to the Jemima Crentsil Hospital in Anaji for medical attention.

Residents of North Kwesimintsim are pleading with the city authorities to intervene by mounting street lights in their area and also direct the police patrol team to add their community to their patrol zones since such crimes are becoming common.