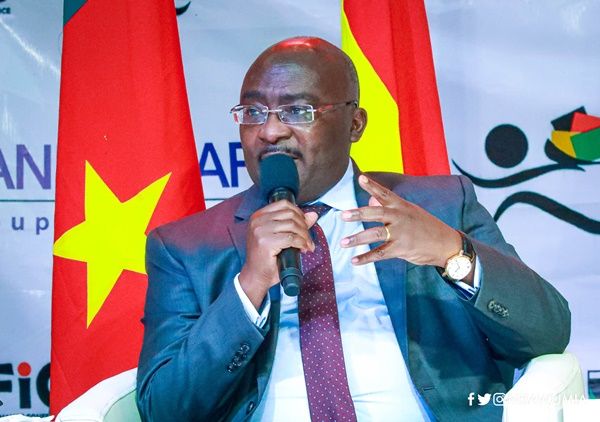 Vice President Mahamudu Bawumia Thursday launched the commercial operations of the Pan-African Payment and Settlement System (PAPSS) with a charge on African central bank governors to connect their national payment switches to PAPSS.

Its implementation is expected to save Africa five billion dollars in transaction costs annually.

It is designed to enable leading-edge technology African banks, payment service providers and other financial market infrastructure to make instant and secure payments between African countries.

The system was designed and facilitated by the Africa Export-Import Bank (Afreximbank), the African Union Commission and the African Continental Free Trade Area (AfCFTA) Secretariat as well as Africa Central Banks.

It allows for instant payments by both originators and recipients to transfer and receive cash in their local currencies anywhere in Africa.

Vice President Bawumia, delivering the keynote address at the launch of PAPSS in Accra on the theme: “Connecting Payments, Accelerating Africa’s Trade,” said the successful implementation of PAPSS would enhance intra-African trade and ensure an efficient and transparent payment system.

It would simplify the historical complexities and costs of making payments across Africa’s borders and provide operational efficiencies that open up vast economic opportunities for African economies.

Vice President Bawumia said PAPSS was expected to benefit all stakeholders from governments, banks and payment providers to the end customers, corporates, small enterprises and individuals.

The speed, simplicity and security of the PAPSS process would greatly improve the capabilities of the participating countries, increasing access to new African markets with less costly foreign exchange complications.

Vice President Bawumia expressed the belief that with the rolling out of PAPSS, governments and African central banks would witness less pressure on foreign exchange liquidity and greater transparency of cross-border transactions.

They would also experience an increase in the potential to generate revenue as well as ease in customers’ burden and enhanced trade facilitation.

“As you are all aware, the underlying motive behind our integration scheme is the expectation that, through collaborative efforts, participating countries in the integration programmes would generate maximum socio-economic benefits for their citizens in the sub-region,” he said.

“Regional integration, undoubtedly, is an efficient tool for overcoming the constraints imposed by the nature and size of individual national markets.”

He observed that if the production of goods and services were carried out in an enlarged regional economic space, there was a greater chance of achieving substantial economic benefits.

Over the years, there had been tremendous emphasis by the Africa central banks to develop domestic payments systems such as Real-Time Gross Settlement, Automated Clearing House, Securities Settlement System, Automated Check Processing System and a National Switch.

However, he said, there was less focus on cross-border or intra-African payments.

“On a related note, we have also witnessed the negative effects of the COVID-19 pandemic on the economies across the globe and more especially on the African economies,” Vice President Bawumia said.

“The pandemic continues to reverse some of the economic gains we have achieved and also brought to the fore sustainability of some of these interventions.”

“Trade has also been impacted through disruption to supply chains of imports and exports of goods and services. The good news, however, is that we have seen increased consumer preference for digital payments, which we have to sustain for intra-African trade.”

Dr Bawumia said the AfCFTA had been given the mandate of promoting intra-regional trade and boosting industrialisation drive and productivity.

The fulfilment of which required the support of all African central banks as supervisors of the payment systems to ensure seamless transfer of funds across the continent.

“It is in this regard that I applaud the AfCFTA and Afreximbank for initiating the pan-African payment and settlement (PAPSS),” he said.

“And I am sure you will agree with me that with the launch of the PAPSS, the building blocks of the AfCFTA are progressively falling into place.”

During the 12th Extraordinary Summit of the Assembly of the African Union on July 7, 2019, in Niamey, Niger the African Union adopted PAPSS as one of its operating instruments of the AfCFTA to boost intra-African trade, stimulate industrialisation and promote sustainable and inclusive economic growth in Africa.