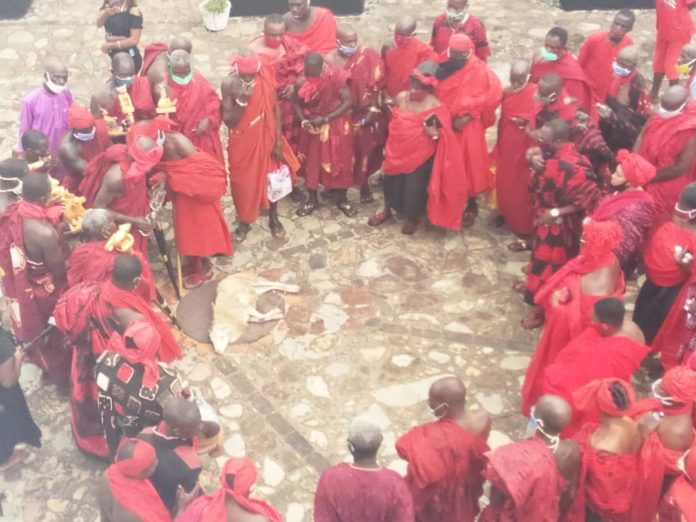 Chiefs and traditional authorities of Upper Dixcove Traditional area in the Ahanta West Municipality of the Western Region have called on the ancestors and gods of the land to deal with the Member of Parliament for the area andsand his cohorts, for besmirching Paramount Chief, Obrempong Hima Dekyi  XIV.

The Chiefs justified that some group of executives aligned with the Member of Parliament for the area, Ebenezer Kojo-Kum, have used certain unprintable words on the Paramount Chief, even to an extent of disgracing him in public.

A curse was invoked on them, one that may take their lives should they fail to render an unqualified apology to the chiefs and traditional authorities in that paramountcy.

An audio recording of a plot by the group went viral. The Chiefs upon processing the content, called a durbar yesterday to take action against the party.

Chief of Mpatase and a king maker at the Upper Dixcove Traditional area Nana Kwesi Yankey who performed the rituals called on the gods to curse any NPP member who will step a foot on their land to campaign for votes.

“We are calling on you the gods to come to the aid of Nananom. Some young men of the New Patriotic Party who are part of the incumbent MP campaign team have uttered insults on us. We are on this libation banning them from campaigning in any part of our lands,” Nana Kwesi Yankey noted whilst addressing the gods in a libation.

Nana Adziku IV, Divisional Chief Agona condemned the utterances of the young men. According to him the chiefs will advise themselves on the next action to take after the two weeks ultimatum has expired.