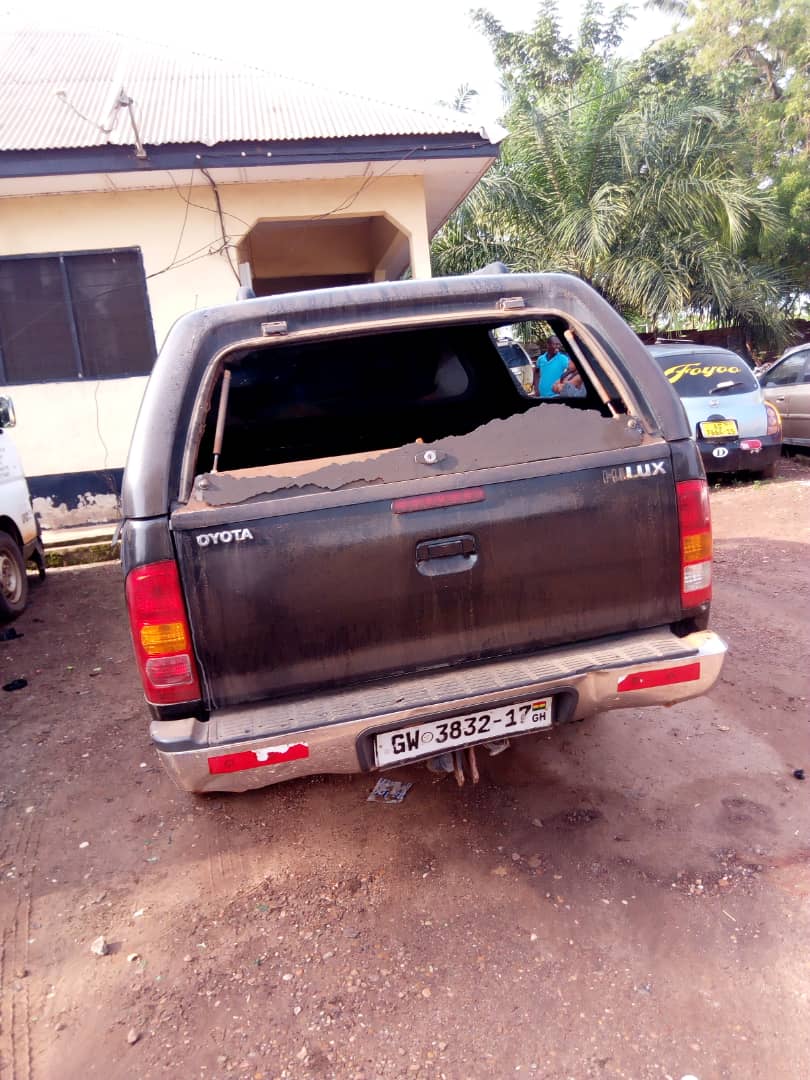 A black Toyota Hilux [with registration number GW 3832-17] allegedly belonging to the chairman was damaged by gunshots, shuttering it windscreens and other glass shields at the sides and booth. The Constituency Chair, Mr Daniel Appiah, and the other victim sustained several gun wounds in the process.

It is alleged that that the two were interfering in a chieftaincy matter in the area, more specifically, attempting to disrupt the coronation of a new chief for the Ankwaso town, Oseadeeye Kwabena Daptey II.

Reports reaching Skyy News indicate the Wassa Amenfi Traditional Council had ruled on a long standing chieftaincy dispute in Ankwaso against the current Chief, Nana Kanka Ababio, granting Oseadeeye Kwabena Daptey II the authority of chiefdom for the Ankwaso Tradition. Nana Kanka Ababio, per the ruling, was to be striped of all titles and rights as inherent to the stool.

“The coronation of the new chief, Oseadeeye Kwabena Daptey II was ongoing in the community when a group of men led by the Chairman confronted them to halt the ceremony. This led to misunderstanding between the two factions, and led to exchanges of gun shots. Police SWAT team from the Bekwai District Police Command intervened to ensure calm, but the NDC chairman-led group started firing gun shots at the police which the police SWAT team retaliated,” a witness told Skyy News.

Their retaliation led to the shooting of the NDC chairman, Daniel Appiah and Kofi Abebrese.

The Wiawso Command has confirmed and defended their action in that matter.

“The Wassa Amenfi Traditional Council ruled a long standing chieftaincy dispute against the current chief, so we were there for protection during his coronation when the two men started firing gunshots at the new Chief. His first two shots missed the chief which led to the intervention of the police. They then decided to fire at the police team.

“There too, they fired two shots at the police, ignoring all police warnings, and were aimed at firing the third bullet at the Police. So the Police retaliated and fired back at them. The two sustained injuries and were rushed to the Komfo Anokye Teaching Hospital for treatment” the District Commander, Supt. Isaac Baah said.

The NDC Chairman, according to reports, has been discharged, however, Kofi Abebrese is still at the Komfo Anokye teaching hospital receiving treatment. The incident happened on Saturday, November 9th 2019 at Ankwaso in the Amenfi Central Constituency of the Western Region.