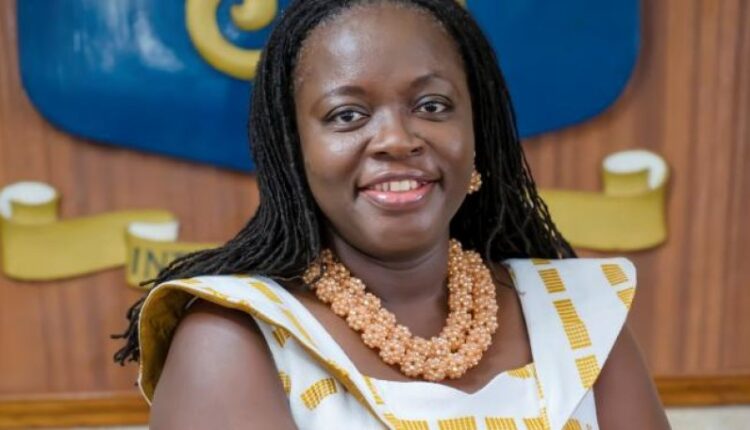 Professor Nana Aba Appiah Amfo, the newly appointed Vice-Chancellor of the University of Ghana, has been inducted into office at a historic and colourful ceremony in Accra.

Prof. Amfo, was until her present appointment, the Pro-Vice-Chancellor in Charge of Academic and Students Affairs, and now the 13th Executive Head and first female Vice-Chancellor of the University, succeeding Prof. Ebenezer Oduro Owusu, whose tenure of office ended on July 31, 2021.

Her appointment was made by the University’s Governing Council led by the former Chief Justice Sophia Akuffo (Rtd), who is the current Chairperson.

Prof. Amfo is a product of the Holy Child and Archbishop Porter Girl’s Schools respectively, and later, the University of Ghana where she did her Bachelor’s Degree in French and Linguistics, before proceeding to the Norwegian University of Science and Technology in Trondheim, Norway for both her MPhil and PhD degrees.

She received additional training in higher education management and leadership from the Harvard Business School, University of Applied Sciences, Germany, and INSEAD, France
Prof. Amfo’s career in academia started in 2001 as a lecturer in the Department of Linguistics.

She was promoted to a Senior Lecturer in 2007, Associate Professor in 2011, and Professor in 2017.
Mrs Mary Chinery-Hesse, the Chancellor, was assisted by Justice Akuffo to outdoor the new Vice-Chancellor, after which she was led to take the Oaths of Office and Secrecy.

They both congratulated and welcomed her as part of the University of Ghana’s senior management team, and wished her well.

President Nana Addo Dankwa Akufo-Addo, who was the special guest, also congratulated Prof. Amfo for distinguishing herself to attain the position of the first female Vice-Chancellor of the University of Ghana, and pledged his continued support to the University and the leadership.

Prof. Amfo in her inaugural address, expressed gratitude to God for her success, and also thanked President Akufo-Addo and the Governing Council of the University for finding her worthy to carry the mantle, and pledged to work hard towards achieving the vision, mission and values of the University.

She appreciated her family and all who made diverse contributions towards her career success and commended her female predecessors for setting a solid footing for her to build on, saying the foundation would be enhanced for the benefit of the next generation of women academics and professionals.

Prof. Amfo said her focus would be on the promotion of creativity and innovation through teaching and learning, and to ensure technology-driven academic work all anchored on humanism, while actively pursuing the vision of becoming a world-Class research-intensive University over the next decade.

She said her plans would be based on six key strategic objectives – reinvigorating impactful research in the sciences, applied sciences, and humanities, resulting in increased research income, exponential growth of research output such as publications, improved citations and vibrant community engagements.

The Vice-Chancellor said the University would develop technology-driven and robust processes in research management, strengthen traditional revenue streams and expand alternative income sources to meet the debt obligations of the University and its current institutional needs.

She said the University of Ghana would ensure the robustness of mechanisms for the prudent management of resources, guarantee value for money and ensure sound decision making in all transactions for success.

Management would further work to create a sense of ownership and commitment among students, faculties, staff and alumni to promote creativity and innovation, she said.

Prof. Amfo also promised to pursue a team building spirit by harnessing the individual talents for the collective good of the institution and collaborate with others outside the University to achieve unity of purpose.

She appealed for a tax waiver support from Government to enable all students acquire laptops and handheld devices for their studies, a need which was critical in a period “where we are upscaling technology to make us functional in the fourth industrial revolution, and as we live through and beyond a health pandemic”.

Prof. Amfo said two more city campuses of the University were being established in Kumasi and Takoradi to absorb the huge number of Free SHS graduates.

She appealed to Government to help clear the University’s huge financial liabilities resulting from judgment debts and botched agreements to allow the University start from a clean sheet as it strengthened alternative sources of revenue for growth.