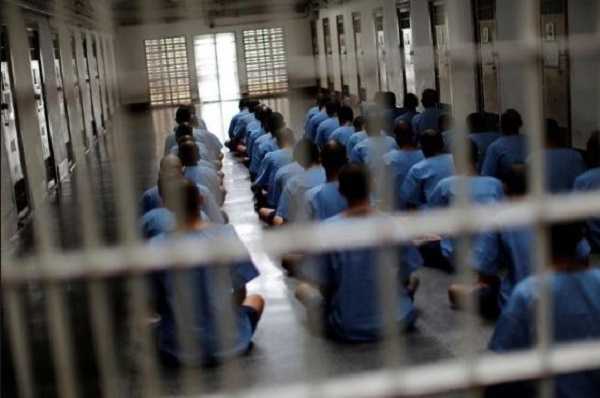 The Union of Ghanaian Association in Germany (UGAG e.V) and all Ghanaians in the German Diaspora have donated sanitary equipment to the Sekondi Prisons to help fight the spread of the coronavirus pandemic in the Region.
The items, comprising drums of alcohol-based hand sanitizers and its corresponding solar dispensers worth hundreds of cedis are meant for both Female and Male Central Prisons in the Metropolis.
Mr Stanley Chris Williams, who presented the items on behalf of the Union, said the donation was part of their commitment to support Government’s effort to fight against the spread of COVID-19 pandemic in the country especially in the prisons.
He noted that the Government alone could not fight the pandemic hence, their decision to compliment the Government’s effort especially, targeting vulnerable and key institutions with the hope of minimising the spread and to fight against the COVID-19 pandemic in the country.
He announced that the Union prior to the Sekondi Prison donation, had made some donations to the Techiman Holy Hospital, Wa Prisons, Kumasi Suntreso Clinic and the Orthopedic Training Centre at Adoagyiri in the Eastern Region and pledged further support from the Union to the Sekondi Prisons when the need arises.
“This is just the beginning and we hope to come to the assistance of Ghanaians anytime the need arises. God bless us all”, he stated.
Mr Williams urged the Officers to make sure that inmates observed the recommended COVID-19 safety protocols and all the measures put in place to save lives and prevent the virus from spreading further.
He noted that the prescribed safety protocols such as the washing of hands with soap under running water, rubbing alcohol-based sanitizer on hands, keeping to physical distance, wearing of nose masks, avoiding crowded places and above all staying home were the surest ways to fight the disease.
Receiving the items on behalf of the Prisons, Superintendent Samuel Amarfo, Western Regional Operations Officer was grateful to the Executives of the Union especially Mr Alexander Okai Anane for the kind gesture.
He deemed the donation as timely since it would augment the already existing ones adding, “These are consumables and they get finished in no time, therefore per the number of inmates we have now, the gesture is a step in the right direction and we appreciate it”.
Among the current Executives spearheading the Union are; Mr Akwasi Opoku Edusei (President), Mr Alexander Okai Anane (Vice-President), Mr Aaron Hooper (Gen. Secretary) and Mr Paul Darmoe (Assist. Gen. Secretary).
The rest are; Mr Paul Hossou (Financial Secretary), Mrs Mary Buabeng (Assist. Financial Secretary), Mrs Cecilia Biritwum (Organising Secretary) and Mr Emmanuel Ossei-Wusu (Assist. Organising Secretary).