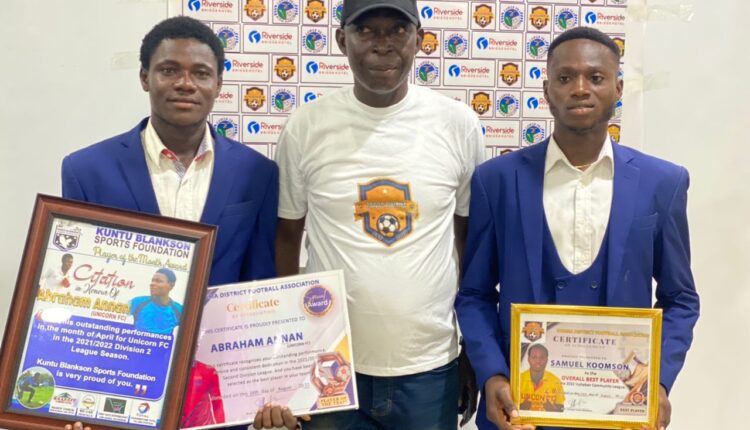 At the just-ended Shama District football season and the current season of the Inchaban community league, Samuel Koomson and Abraham Annan both took home significant victories.

Abraham Annan, a goalkeeper and a free kick expert used his special qualities to score 4 goals for his team Unicon FC, a division two side in the Western Region earning him the best player of the season for the club.

A large number of clubs from within and outside the region have been drawn to Annan because of his exceptional contributions to his club.

Another player who contributed more to the success of Unicon FC in the just-ended division 2 league was Ebenezer Koomson.

The skimmer contributed 12 goals to the club in the just-ended season. For Koomson, the football season was great and not only with Unicon FC but also with Nzema Kotoko in the Inchaban community.

Nzema Kotoko participated in the Inchaban community league and won it in a grand style without losing a single game.

Emmanuel Koomson scored the winner and the only goal in the final to help Inchaban base Nzema Kotoko win the competition for the first time in six seasons.

With that beautiful performance from the young talent, he was awarded as the overall best player of the Inchaban community league.

Emmanuel Koomson has also caught the eye of some big teams within and outside the region and it’s possible he will not play for Unicon FC in the coming season.