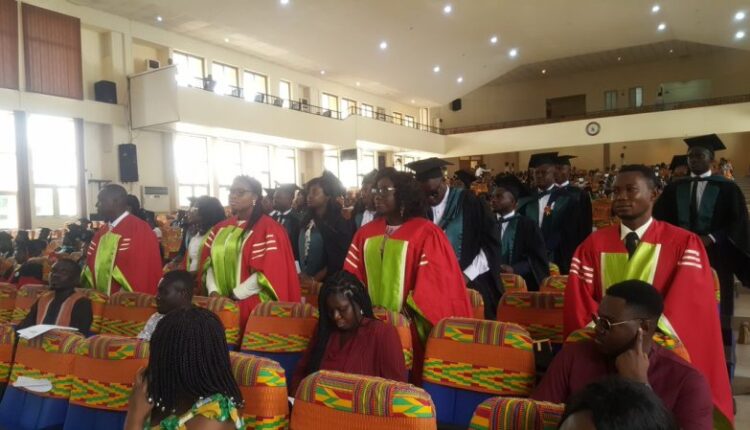 The University of Mines and Technology (UMaT), Tarkwa is gradually making significant progress with its gender mainstreaming policy.

Out of seven graduates who were awarded Doctor of Philosophy degrees at a special congregation held on Saturday, five were females, representing 71 per cent as against two males, 29 per cent.

“This is the highest female PhD graduands UMaT has ever produced at a single congregation, and this is an indication that we are on course with the gender mainstreaming agenda in UMaT,” said Professor Richard Kwasi Amankwah, Vice-Chancellor of UMaT.

He stated that twenty of the graduates were also awarded master’s degrees in various fields.

During the Appiatse explosion incident which claimed thirteen lives and displaced the whole town, the Vice-Chancellor noted that, as a service to the community, UMaT volunteered to conduct all geotechnical surveys towards the reconstruction of the village free of charge as their contribution.

In addition to this offer, Prof Amankwah said, the Disaster and Emergency Management Hub of the University conducted drone studies on the area immediately after the explosion and UMaT collected data such as the size of the crater and extent of damage which they have already shared with the Ministry of Lands and Natural Resources.

He added that the Counselling and Student Support Unit organized counsellors in Tarkwa area to interact with the residents of Appiatse, who were traumatized by the event, he added.

“There is a high interest in the programmes run by UMaT and this has increased the student population. This has resulted in an urgent need to make more accommodation available to students.

The University has therefore introduced another aspect of Private-Public-Partnership referred to as Build-Own-Operate-Maintain (BOOM) as the new paradigm for development of hostels in UMaT”, he indicated.

This concept, Prof Amankwah mentioned presents more advantages to the investor and entreated estate developers and other interested investors to come to ‘Macedonia’ and help provide spaces for student’s accommodation.

He urged the graduands to team up and create tangible benefits that would make society a better place, added that, “ Our Incubation Hub will work with all who want to turn innovations into viable ventures”.

“As you transition to the next stages of your lives, please do well to project the values of Knowledge, Truth and Excellence and contribute to the development of your alma mater”, Prof Amankwah said.

The guest speaker, Mr Kwesi Enyan, Executive Director of Operations, Rocksure International, commended the UMaT for the various interventions they had made to complement the governments agenda to stop illegal Artisanal Small-Scale mining and instead promote sustainable Artisanal Small-Scale mining to protect forest reserves, water bodies, generate employment and income and monitor gold production from the sector.

“At the first litmus test, the key performance indicator of our success in fighting illegal and irresponsible mining is to see our conspicuously and visible polluted muddy waters at the Offin, Ankobra, Pra and Bonsa become so clear and clean that we can see the bed of these Rivers from above and they are even wholesome to drink until then l urge all stakeholders including the University to continue the fight.”

Some key buildings in the University, which included the library block, mini auditorium and former administration block were renamed in honour of three past Principal Officers for their hard work and commitment in advancing the cause of this institution.