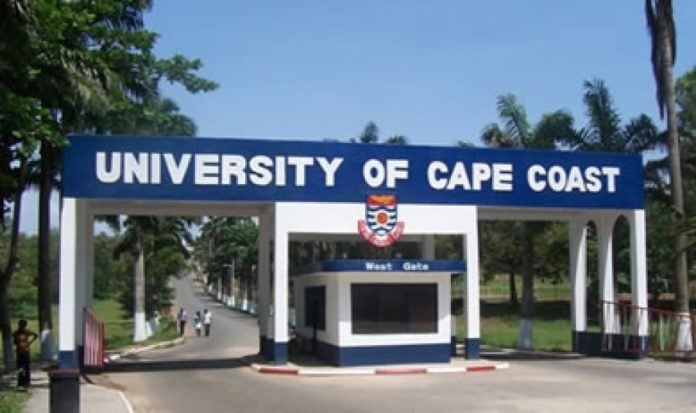 The Public Relations Officer of the University of Cape Coast, Major Rtd. Kofi Baah Bentum has blamed the flooding on the school’s premises on it’s location.

Lectures were on Wednesday suspended following hours of heavy downpour and subsequent flooding in some parts of Cape Coast including the University of Cape Coast campus.

Speaking to the issue, Public Relations Officer of the University, Major Rtd. Bentum, said that claims that the flooding was caused by choked drains are simply untrue.

He explained that the school is surrounded by high lands thus causing water to flow through their campus any time it rains.

“To be honest with you, this is not new to the University of Cape Coast. The topography of the university is such that it is a low-lying and it is surrounded by communities and all the waters that flow through those communities pass through the university in order to get to the sea. So anytime it rains excessively, we experience some amount of flooding on certain parts of campus but I must add that Wednesday’s one was a little on the high side” he explained.

Management of the school were left with no choice but to suspend lectures following hours of downpour on Wednesday.

In it’s statement addressing the issue, management advised staff and students to remain in their homes and hostels as a safety measure.

“We wish to inform all staff and students of the University of Cape Coast that, in view of the massive flooding of parts of the campus arising from the heavy rainfall over the past several hours, lectures and quizzes have been suspended for the day. Further directives will be issued via notices and ATL FM. Students and staff are expected to remain safe in their homes and hostels” he concluded.

How Do Christians Deal With Stress?