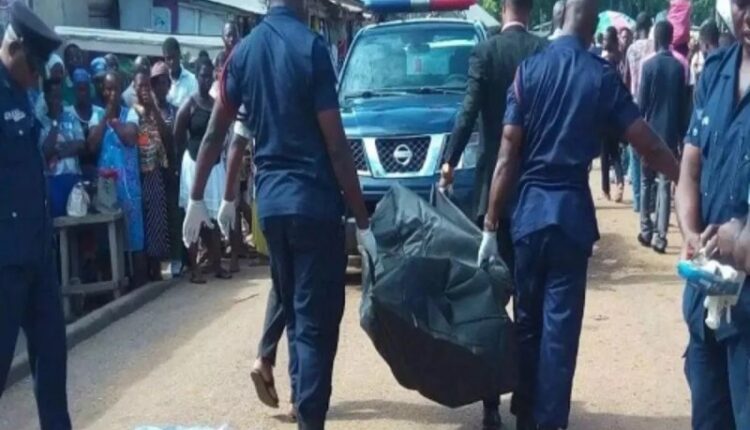 A young lady in her mid-twenties has been found dead in a Guest House in Somanya.
According to the Police on April 6, at about 1340 hours, David Teye Annor, 63, a pensioner came to the Somanya District Police Headquarters and reported that, he is the Director of a guest house located at Low Cost, a suburb of Somanya.
The Director said on Monday, April 5, at about 1500 hours, a man who gave his name to them as Charlse Tetteh together with a lady came to lodge at the place.
He said on April 6, which was on Tuesday, at about 1200 hours, when it was time for them to check out, he, the director visited the room only to see the lady in a pool of blood.
Police Sergeant Francis Gomado, Public Relations Officer for Eastern Regional Police Command told the Ghana News Agency that, the police together with the complainant visited the scene of the said guest house.
He said the complainant led the Police to room one and saw the lady in a lateral recumbent position on the bed, in a pool of blood with the said Charlse Tetteh nowhere to be found.
He said the handbag of the deceased was found on a chair and when it was searched an Identity card bearing the name, Believe Sakitey, 25.
Sgt. Gomado said there was a phone number at the back of a yellow fever vaccination card which was also found inside the deceased’s handbag.
He said the Police called the number and one Bright Kekeli answered the call and told them the deceased was his younger sister.
He said he was invited to come to Somanya District Headquarters to assist in investigations.
He said, a team from the Koforidua Regional Crime Scene office of the Police, later went to the scene, where the body was removed and sent to Atua Government Hospital.
The Police Public Relations said the victim was pronounced dead on arrival after Dr. Richard Derry had examined the body.
The body has since been deposited at the Atua Government Hospital mortuary for preservation and autopsy.