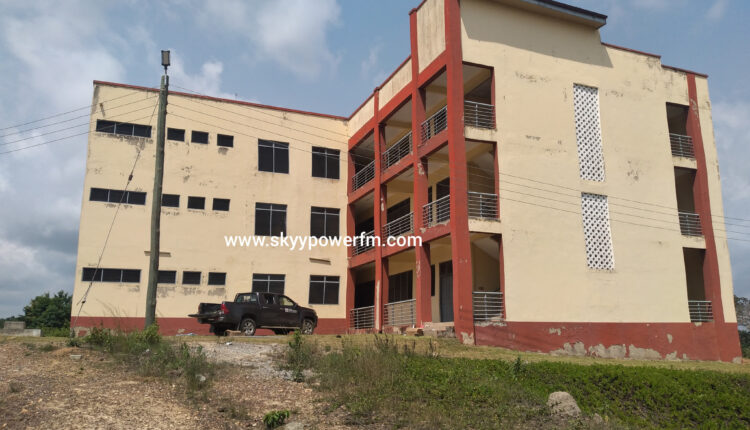 The Takoradi Technical University (TTU) has commissioned a new campus in Akatakye, a small community near Bukoro in the Ahanta West Municipality of the Western Region.

The campus which is expected to host some five thousand (5000) students comprises four blocks, an administration block for administrative purposes, a lecture hall block for learning, and two other blocks that will be housing machinery for practical learning.

Since it is a new site and there are no hostels available for students, they are bused from various points to the campus to learn, including the teachers and after lectures, they are taken back by the school bus and dropped off at their various locations.

Skyy Power FM Journalist, Alex Tagoe was there to monitor the campus and the atmosphere since it was the first time the campus was being used for academic purposes.

According to him, the campus was tidy and neatly managed but a few finishing touches were necessary for some buildings. Work was still ongoing as the electricity company was working during the time of visit, fixing some street lights for night visibility.

Internet connectivity for research and learning purposes was also available and very strong at the campus which will make learning very convenient for the students.

However, one of the things anyone who makes his way to the campus will notice is the state of the road that links the school to the main road.

It is in a deplorable state with a high concentration of dust which might discourage anybody to return back to the campus anytime soon after their first visit.

Some taxi drivers in the Bukoro community who ply the route shared their opinion concerning the road and pleaded to the local government to come to their aid.

According to a taxi driver, it’s been eight (8) years since any form of work was done on the road and since the TTU campus is now officially opened which they will be obviously transporting people to the campus, they are pleading to the government to do the needful by fixing the road.