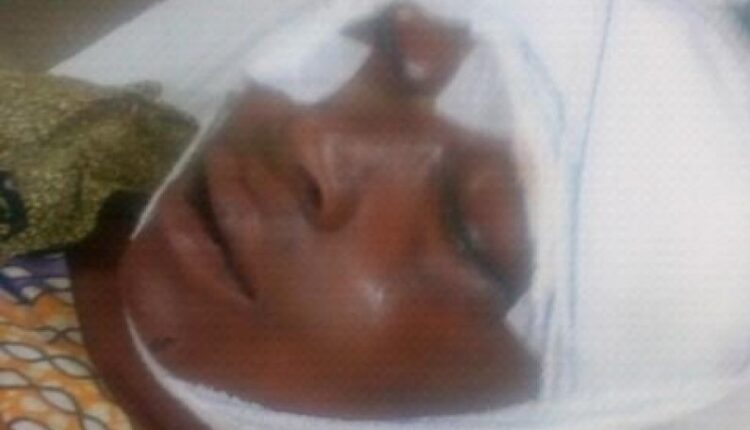 Domestic violence may not sound threatening like a deadly virus, but its effects on victims is disheartening and unimaginably cancerous to say the least.

The monstrous act is mostly perpetuated by men against their spouses-some of them may leave you wondering as to whether the perpetuators, indeed, have human hearts.

Amanda Basinbo, a 31-year-old woman from Nanville in the Nadowli-Kaleo District of the Upper West Region, who sustained deep wounds on the head is currently incapacitated after undergoing a surgery at the Komfo Anokye Teaching Hospital (KATH) in Kumasi.

She is currently not able to bend down, carry any load, chew anything hard or go out on a scorching day, simply put, she’s non-productive.

This predicament is not due to any birth defect or growing up accident, but rather as a result of the cruel violence she suffered in April, 2020 from her own husband, Mr Vitus Kundiyiri, a security man in Wa who hails from Sankana in the same District.

Amanda was at carpenter in a small town in the Bono East Region where she was engaged as a labourer out of which she supported her family and the education of her 12-year-old son. She returned to Wa to join the family during the COVID-19 lockdown period.

One night, Mr Kundiyiri was trying to have sex with his wife in their single room while their 12-year-old son was still awake. Amanda resisted with the excuse that the son was still awake – he then commanded the small boy to get down from the bed and lie on the floor, which he obeyed with fear.

Whilst on the floor, he saw his father hold the mother tightly on the neck in a bid to force her to give in to his demand. The boy then hatched an idea to save the mother by faking that he wanted to visit the washroom which is outside the compound.

He was then given the mother’s phone to use the light to aid him see his way to the toilet. Whilst outside, he quickly called the mother’s sister, Vera Basinbo, who lives in another suburb of Wa to report to her what was happening between the mother and the father in the room.

Mr Kundiyiri then heard the son talking on the phone outside and he quickly jumped out of the room to discipline him, but he dropped the phone and run to a nearby church where people were worshipping to seek protection and to call for help for his mother.

Mr Kundiyiri in his failed attempt to catch the boy, then, picked the phone on the floor and told his sister-in-law that the boy lied to her and that she should not worry because nothing untoward was happening.

Amanda visited Vera the following day and the bruises on the neck coupled with the red eyes confirmed that indeed what the boy tried reporting to her was true.

Amanda later returned home in the evening to cook for the family. After serving the husband, she told him she was going to bath. Whilst she was preparing herself to go take her bath, her husband rushed out and started fetching water into the bucket.

Amanda found her husband’s behaviour to be strange but thought he was trying to make up for what happened the previous day. In her state of surprise, she added more water to what her husband had already fetched and took the water to the bathroom.

In her usual habit of brushing her teeth before bathing, Amanda detected unusual foam with the water that she did not believe was normal. Out of suspicion, she came out to check the drum to confirm whether the entire water was foamy like that, but that was not the case.

She then called the husband’s younger sister who is also staying with them to come and have a look at the water and to serve as witness whilst she fetch some of the water into a plastic container to keep as evidence should anything happen to her after bathing it.

The husband who was listening to the conversation between both of them, quickly dashed to the bathroom, picked the bucket of water and poured it away.

Amanda’s suspicion was now heightened and she pointed to the husband that his attitude seems he had a grand agenda to either hurt or kill her.

Amanda then told him that she was not going to pass the night in the same room with him after suspecting that he was planning evil against her.

Amanda then went into the room to dress up and told the husband that she was going to her sister’s place to pass the night there and she set off.

Vera, who narrated the incident to this Reporter, alleged that it was acid Mr Kundiyiri had mixed in the water with the intention of getting her sister’s body burnt if she had bathed with the water.

Immediately she left the compound, the husband rushed into the room and picked a hammer and a pickaxe and started following the wife on her blind side.

His sister attempted to follow him too, but he turned and threatened her to go back to the room else he was going to kill her and she obeyed out of fear.

Amanda upon realizing someone was following her turned to see the person and was struck hard on the head with the pickaxe; she screamed and he repeated the action twice, causing her to fall to the ground unconscious.

Neighbours heard the scream and one of them closed by who thought someone was being attacked by armed robbers, picked his cutlass and rushed to the scene only to see the man on top of the woman hitting her with the hammer whilst she laid in a pool of blood.

The man after shouting for help, then raised his cutlass and started advancing towards Mr Kundiyiri and he, upon sensing danger, got up and absconded. The man then took Amanda and with the help of other neighbours, rushed her to the Wa Regional Hospital where she was later referred to KATH in Kumasi for surgery.

The ambulance cost together with the scan and surgery amounted to GHȻ15,900.00 excluding cost of medicines and other expenses. This was realized largely by donations from the general public with the support of the families of the couple.

But for the benevolence of the public, Amanda’s story, perhaps, would have been different today.

The accused after days of being hunted for by the Police, later reported himself to the Police in the company of two lawyers according to Vera. He was subsequently processed for court.

According to investigations, the accused was first charged with attempted murder by the Domestic Violence and Victims Support Unit (DOVVSU) of the Ghana Police Service in the Upper West Region, but at the court, the charge was later changed to hurting; a development DOVVSU was particularly not happy with.

Vera, an apprentice, currently lives with three children including the 12-year-old boy of the couple. She has no source of income as she depends only on the little money given to her by her children’s father to take care of the children and herself.

She said the boy was currently in class five in a private school in Wa, adding that he was very good in school but fear he may soon drop out of school due to non-payment of school fees.

“He currently owes the school an amount of GHȻ534.00 in fees – I cannot afford it,” she lamented sadly.

Mr Kundiyiri’s attitude towards his child is in violation of the Children’s Act, 1998 (Act 560), which talks about the duty of parents in the maintenance of their children.

Meanwhile, in the Upper West Region, a total of 384 cases of domestic violence were reported in 2020 and 73 cases in the first quarter of 2021 according to the Domestic Violence and Victim Support Unit of the Ghana Police Service (DOVSSU).

Lessons from the case

Not only has Amanda’s face been disfigured, but she has also lost her job and is now even less productive as a result of the incident. Her son’s education is in limbo as the inability to pay his school fees may just push him out of school. He’s also been deprived of his right to live happily with his parents.

As the case is pending in court, one can only wish that at the end, justice will be served. The only way to discourage people from such monstrous acts of violence against their wives is to punish perpetrators severely to serve as deterrent to others.

Many of such cases also happen in the hinterlands but are unreported. There is therefore the need to adequately resource DOVVSU to act proactively by spreading its tentacles to these areas in order to protect the rights of these vulnerable people too.

How Ghana Football Association and the Black Stars…