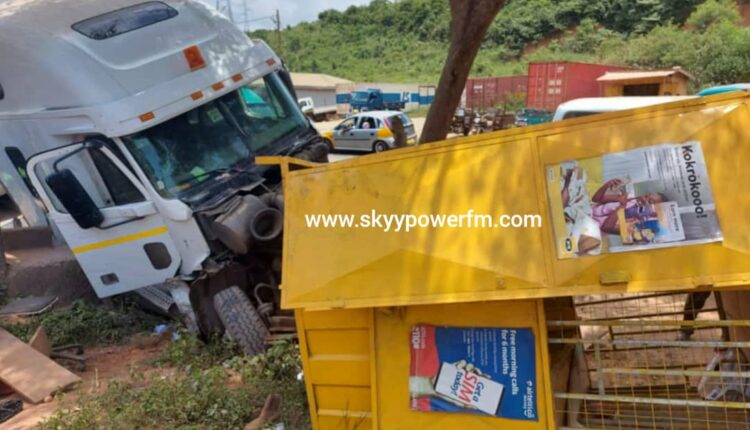 Information reaching Skyy Power 93.5FM is that, a trailer with registration number GT 1675 – 11 carrying lime stones has rammed into an MTN Mobile Money merchant’s kiosk after a break failure at Ketan Junction in the Sekondi-Takoradi Municipality.

According to an eye witness who spoke to Skyy Power FM’s Nana Yaw Kumi, he indicated the trailer lost control from Agric Junction when the brakes failed and veered off the road. The MTN Mobile Money Merchant who was in her kiosk breast feeding her baby saw the trailer coming at her direction and suspected something must be wrong from the movement of vehicle, so she had to get out and find a safe place to stand after which the trailer rammed into her kiosk.

In an interview with the Mobile Money merchant, she said, ” I was in my container breastfeeding my baby when I saw the trailer coming at my direction. I suspected something must be wrong when I realised the trailer veered off the main road and I had to run away with the help of my sister holding my baby”.

Also, the driver and his assistant jumped out of the vehicle when they got closer to the kiosk with both of them sustaining multiple injuries and later been rushed to the hospital to receive treatment.