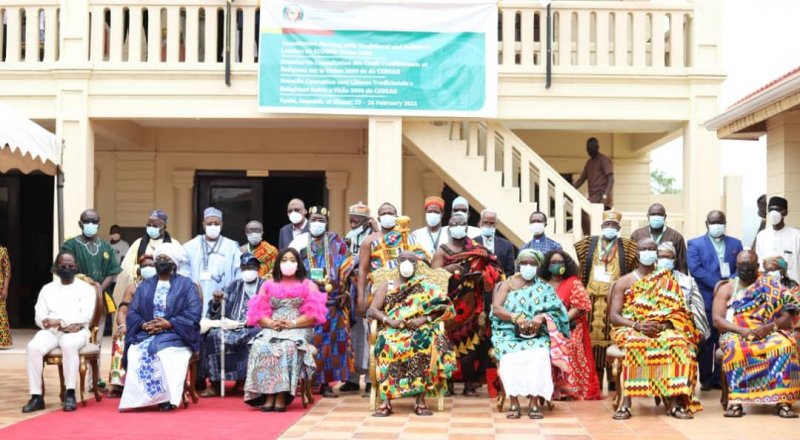 A consultative meeting with traditional and religious leaders on ECOWAS Vision 2050 was on Thursday held at the Ofori Panin Palace at Kyebi in the Eastern Region to discuss opportunities for sustainable development and environmental preservation.

The ECOWAS Vision 2050 envisions a borderless, peaceful, prosperous, cohesive region, built on good governance, where the citizenry has the capacity to access and harness the region’s enormous resources for sustainable development.
Madam Shirley Ayorkor Botchwey, the Minister of Foreign Affairs and Regional Integration-designate, recalled that the ECOWAS Vision 2020 was adopted in June, 2007, by the Authority of Heads of State and Government of ECOWAS as the development blueprint for the transformation of West Africa into a borderless, peaceful and prosperous region.She said the ECOWAS Vision 2020 came to an end in December 2020, necessitating the development of a roadmap for the preparation of the Post 2020 Vision – now referred to as ECOWAS Vision 2050.
Madam Botchwey noted that the processes to fashioning out the Vision 2050 commenced in January 2019, with the meeting being part of that ongoing process.
“The realisation of this noble vision depends, to a large extent, on local actions taken by our community citizens with the support of our traditional and religious leaders who are the custodians of our societal norms,” she said.
Madam Botchwey said to effectively support the local actions, it was important to forge partnerships with relevant stakeholders including traditional and religious leaders in view of their extensive outreach and presence in the region.
“It is acknowledged that your views are highly respected…. underscoring the importance of your inclusion in this regional assignment to develop a dynamic and implementable ECOWAS Vision 2050,” she said.
Madam Botchwey said they were aware that hitherto, ECOWAS had been seen, and rightly so, as the Community, which had lost touch with the citizenry; adding that it was basically viewed as a Community belonging to bureaucrats and politicians without the involvement of the grassroots.
“I am happy that collectively we are taking commendable steps to correct this wrong impression about ECOWAS,” she said.
“I am of the firm conviction that this meeting and subsequent engagements with other stakeholders will lead to outcomes, which will contribute to the formulation of an attainable and relevant objectives for the region.”
The Okyenhene, Osagyefuo Amoatia Ofori Payin, said it was gratifying to note that such a historic occasion to map out strategies for long term developmental challenges in the sub region placed unique emphasis on involvement of traditional rulers.
“It is a solid and glorifying tribute to the positive role that traditional authority can play in the social and economic uplift of our people and the many ways it can contribute towards the goal of national progress and prosperity,” he said.
He said it further signified the distinguished priority and commitment to the attainment of the stated goals of the Vision 2050 by the ECOWAS Commission; adding: “This Consultative Meeting has come at an opportune moment”.
The Okyenhene said ECOWAS hosted the largest economic and political union in Africa and had the responsibility to set an example for the rest of the continent and the whole of the developing world.
Madam Finda Koroma, the Vice President of the ECOWAS Commission, said the selection of Ghana for the first series of consultations was deliberate because they were seeking to return to the roots of Pan-Africanism that was founded by the country’s founding fathers.
She said the late Osagyefo Dr Kwame Nkrumah, Ghana’s first President, continued to inspire them as they witnessed the recent fight for civil rights around the world.
Madam Koroma expressed gratitude to the Government of Ghana and the Okyenhene for hosting the meeting.
SOURCE: GNA
ECOWAS Vision 2050Traditional/religious leaders
You might also like
News