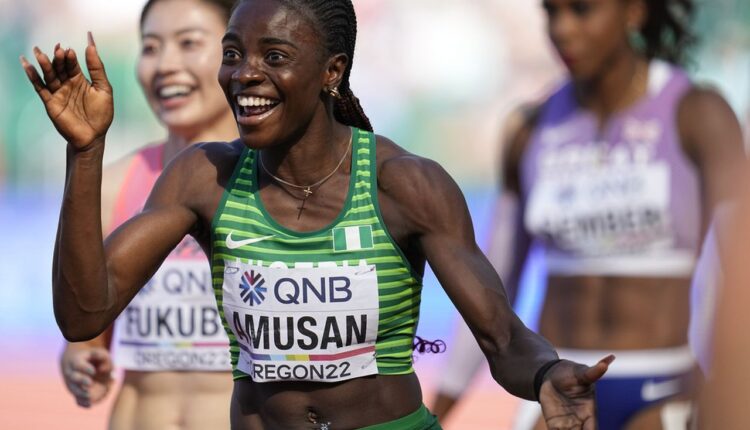 Toby Amusan of Nigeria wins the gold medal in the 100m hurdles at the World Championships.

Nigerian Toby Amusan won the gold medal in the 100m hurdles with a world record of 12.06, originally entered at the World Championships on Sunday, but was later ruled unable to compete due to wind speeds exceeding legal limits.

Amusan broke the world record of 12:12 in the semi-finals at Hayward Field last Sunday.
After recovering from a slower start, she cleared the barrier 0.17 seconds ahead of silver medalist Brittany Anderson of Jamaica.

“The goal was to come out and to win this gold,” said Amusan.

“I believe in my abilities but I was not expecting a world record at these championships. You know, the goal is always just to execute well and get the win. So the world record is a bonus.”

Olympic gold medalist Camacho Quinn of Puerto Rico accelerated halfway through but faced Anderson in the final after she made it through the final to win the bronze medal at the inaugural World Championships.

“I got my nerves to be honest. It kind of showed on my face but I am just glad to come out here,” said Camacho-Quinn. From this point on, it is only going to be faster … I think we had the best event of the whole world champs.”

Anderson told reporters that she hit some hurdles but was pleased with her performance.
“I feel like everyone is so excited now,” she said. “I came out here to do what I had to do and I did it.”

In the final, 2019 champion Nia Ali and US medalist Alaysha Johnson were eliminated after going over obstacles and falling in the first round. U.S. silver medalist Kendra Harrison, who broke Amusan’s 2016 record in the semi-finals, was disqualified.

Amusan’s world record in the semi-final shocked the world of athletics. “Wow,” 200m champion Noah Lyles tweeted: “Are you kidding me?”

Amusan said she was surprised to reach the semi-finals but knew what he needed. “I couldn’t believe it when I saw it on screen after the semi-finals, but it was only a matter of time,” she told reporters.