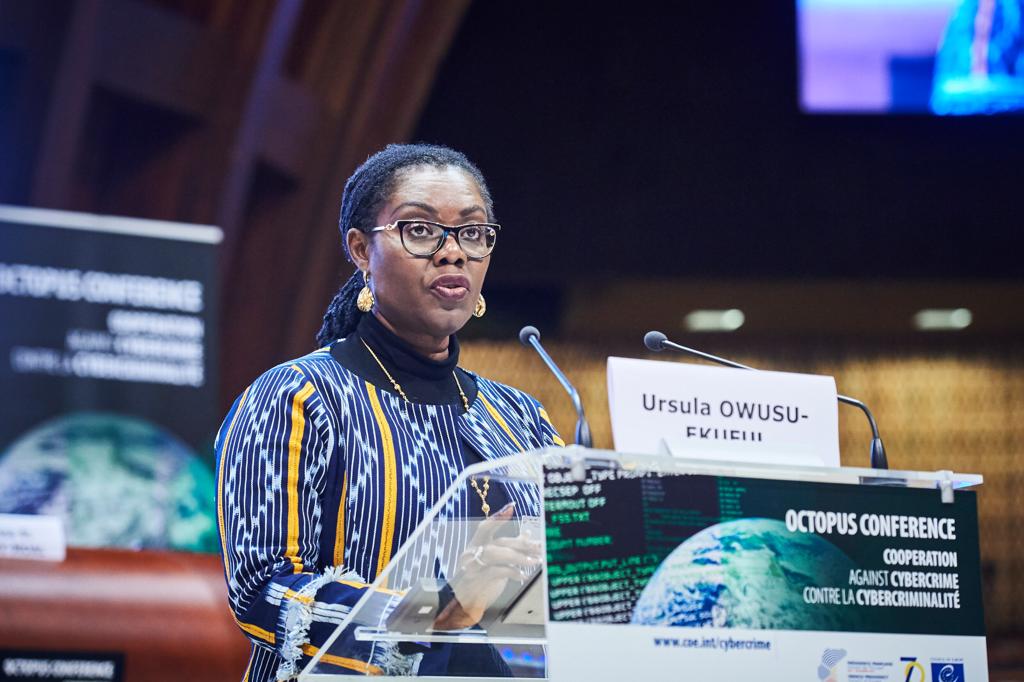 A clarion call has been made on the global community to urgently consider ways of reinforcing the application of international laws on cyberspace. Ghana’s Minister for Communications, Mrs Ursula Owusu-Ekuful reckons that growth in the global digital economy, requires an urgent interrogation of the potency and application of international laws in dealing with various forms of cybercrime and threats.

Delivering a keynote address at the formal opening of the Octopus Conference 2019 in Strasbourg, France, the Minister charged the international community to test the application of existing international laws in dealing with these crimes and threats. She is convince some clarity is needed on this development, as the world’s digital space expands.

Mrs Owusu-Ekuful asked the audience to urgently consider the answers to questions which constitute test cases for the application of existing international norms to cybersecurity incidents:… ‘what kind of response is appropriate and proportionate to attacks emanating from a malicious state actor against a country’s Critical National Information Infrastructure? What are the existing international mechanisms for cross border investigations into such cases? Is there any level of state involvement, apart from individual culpability, when state owned computers are used to facilitate an attack against another state?

The Minister also affirmed Ghana’s commitment to the fight against cybercrime through international cooperation. She cited Ghana’s current engagement with the Council of Europe, our ratification of both the Convention on Cybercrime (Budapest Convention) and the African Union Convention on Cyber Security and Personal Data Protection (Malabo Convention), Ghana’s leadership in the Freedom Online Coalition (FOC), our membership of the United Nations  Group of Governmental Experts on Cybersecurity and the UN Open-Ended Working Group, as testaments to our collaborative efforts with international partners, in addressing cybercrime.

She argued that technologies such as Artificial Intelligence (AI), Internet of Things (IoTs), cloud infrastructure and Blockchain technology, despite their enormous benefits to our digital economies, pose some great deal of threat to people, nations and the world at large.

According to the Minister, the advent of AI has led to the development of tools like chat bots which have made it possible for machines to talk to people who would never know they’re dealing with a machine. In view of these developments, ‘identification of criminal suspects as well as attribution of culpability to suspects, even when they are arrested becomes a challenge’,

The Minister praised the Council of Europe for its work on addressing digital electoral interference. She cited the Guidance Note developed by Cybercrime Convention Committee (TCY) of the Budapest Convention to support State Parties to apply existing articles in the Convention against the criminal use of computer systems in elections.

The Secretary General of the Council of Europe, Mrs. Marija Pejčinović Burić, who also spoke at the event, called for the strengthening of the international response to the fight against cybercrime. Other speakers at the opening of the conference included the Director of Information Society and Action against Crime at the Council of Europe, Mr. Jan Klejssen, the Attorney General of Costa Rica, Mrs. Milia Navas Aparicio and the Executive Secretary of the Cybercrime Convention Committee, Mr Alexander Seger.

The Minister was accompanied to the conference by the National Cybersecurity Advisor, Dr Albert Antwi-Boasiako, Executive Director of the Data Protection Commission, Madam Patricia Adusei-Poku and Director of the Cybercrime Unit of the Criminal Investigation Department, Dr ACP Gustav Yankson.

The Octopus Conference, held every year in Strasbourg, constitutes one of the biggest international platforms for the exchange of views and good practices in the fight against cybercrime. The conference examines ways of strengthening the rule of law in cyberspace.

4,500 girls trained under the ‘Girl-in-ICT’ initiative