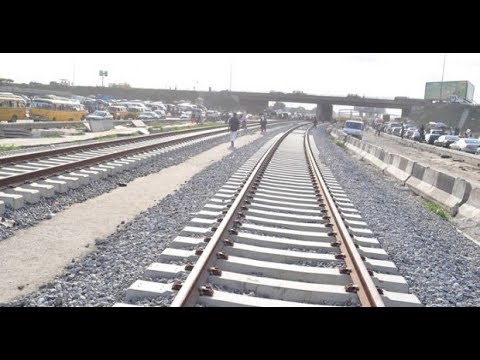 The 99 kilometers Single Standard Gauge Railway Line that leads from Tema to Mpakadan will be completed by June 2020, Ghana’s Minister for Railway Development, Joe Ghartey has reiterated. The assurance, Mr Joe Ghartey notes, is based on commitment demonstrated by AFCONS Infrastructure, a local plant set up by the project executors; to complete work within schedule.

The project which is estimated at a cost of $444 million, was awarded to AFCONS Infrastructure, encompasses the construction of rail tracks of standard gauge, railway maintenance facilities for locomotives and wagons, building of stations at specific locations with communications and signal equipment and capacity building in all aspects of railway systems.

Acknowledging the efforts of the Kornor of Manya Krobo, Nene Sakitey II in facilitating the resolution of land disputes, which could have threatened the continuity of the project, the Minister said “indeed you have been more than justified” in intervening with the settlement of compensations to project affected persons.

He recounted that the historical experience and adverse impact the community has suffered, with government’s land acquisition process, have created a sense of mistrust and insecurity among the people when their properties and lands are being taken by the state for infrastructure projects.

Hon. Joe Ghartey based on an assessment of work done on the project, told the chief and people of Manya Krobo at a durbar that “by next year June, me and you will sit on the train”

Kornor of Manya Krobo, Nene Sakitey II, on his part underscored the economic significance of the railway to his people and the country at large. He reiterated, on behalf of his people their optimum support to ensuring that project is successful.

“I understand the relevance of railway development and how it will help commerce in Manya Krobo and in Ghana as a whole. So we support you fully, 100 percent. The railway project over there is very significant.

“I like it and I am sure my people will love it” he said.

He added that “this job is not your job alone, it is all of us. We have to go around and see whether the job is going on right. And I’ve been around, and I am impressed by what I’ve seen”