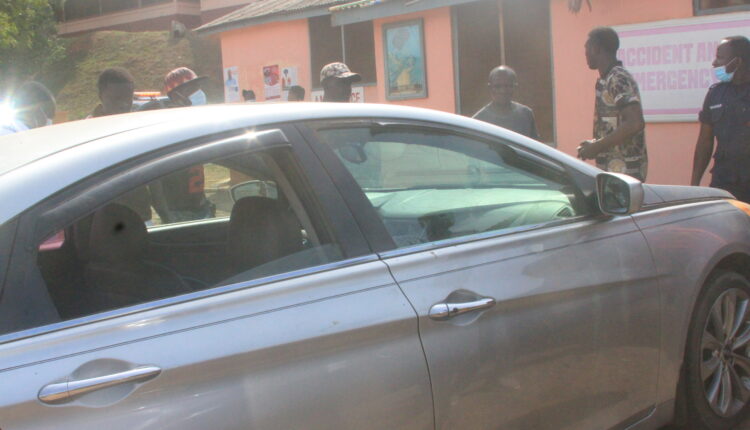 The Anaji Taxi Station driver who took the Amanful armed robbery victims to the hospital, Mr. Lazarus gave his account on Skyy Power 93.5FM on what he saw and how the victim died.

Lazurus in his account made it known the victims parked their car in front of a shop called Lucky Bar which is opposite their taxi station. He was a bit far away from the action but the noises prompted him and his friends to visit the scene since their taxis were parked there.

However, the robbery operation was over before he got there and saw the victim helplessly in the front seat of his car with gunshot wounds.

He said ” After getting to the scene, I saw the man sitting in the front seat of his car with gun shot wounds, his eyes widely open and struggling to breathe. The wife was also in the car with a guy who was an escort to help them purchase some building materials for their housing project”.

“I let some of my friends help me relocate the man to the backseat of the car and drove him to the Takoradi Hospital. He was breathing heavily and you could sense he was suffering but was alive when we got to the hospital. He got referred to another hospital but before the ambulance arrived, he was dead”, he added.

Also, he made it known the robbery operation was so intense that nobody could go close and help the victims, the robbers were giving warning shot just to scare people off from approaching them.

The victim, Mr. Charles Kwakye is a 61-year-old who is believed to have returned from Switzerland barely 2 weeks ago and has been in Takoradi for only 3 days.