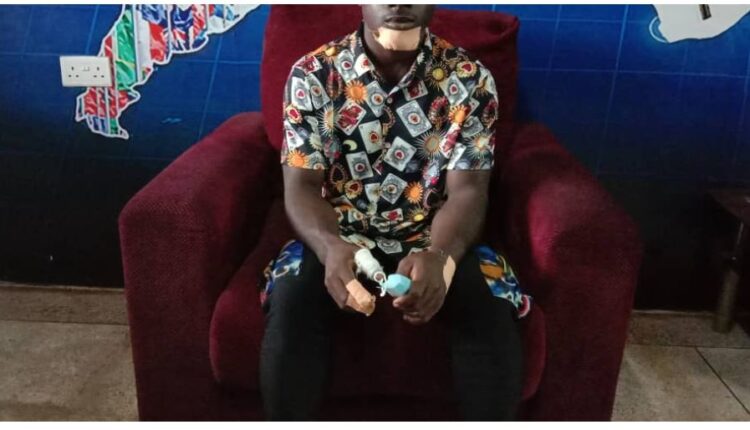 Armed robbers have been registering their presence in almost every region in Ghana. They have caused severe troubles and claimed innocent lives in parts of the country including the Western, Ashanti, Greater Accra Region, and many others. Early this year, some armed robbers stormed the Takoradi Market Circle and killed a Ghanaian who had just returned from abroad.

Just as residents thought the situation is calm, another armed robbery case has been recorded. This time around, a taxi driver suffered the wickedness of the armed robbers. The driver whose name has been given as Richard is currently in a critical condition after his encounter with armed robbers. The armed men had attacked him at Airport Ridge, a suburb in the Sekondi Takoradi Metropolis of the Western Region.

The taxi driver obliged, and took him to a different location since he was still working for money. Upon reaching the airport area, where the armed robber claimed to live, he pulled life threatening tools including shockers, knifes, and others. He pointed them out to the taxi driver and threatened to kill him with the knife, this was after he had used the shocker on him.

The driver did not give up easily and decided to save his life by holding the knife. In the process, the knife cut off two of his fingers on the right hand. He also sustained severe wounds. The armed robber pulled him out of the taxi and decided to drive away. But God being so good, he drove the 2021 registered Toyota Yaris in a gutter nearby. He had no other option than to bolt since resident living around started coming to the scene.

“I feel pains all over my body. I have lost my two fingers and have sustained wounds on my waist and other parts of my body. I’m currently at the hospital receiving treatment. If not for people around, I might have lost my life and vehicle”. Richard narrated. The Kwesiminstim District Police Command has officially taken over the issue and commenced investigations. The police is currently on a manhunt for the armed robber who committed the crime.