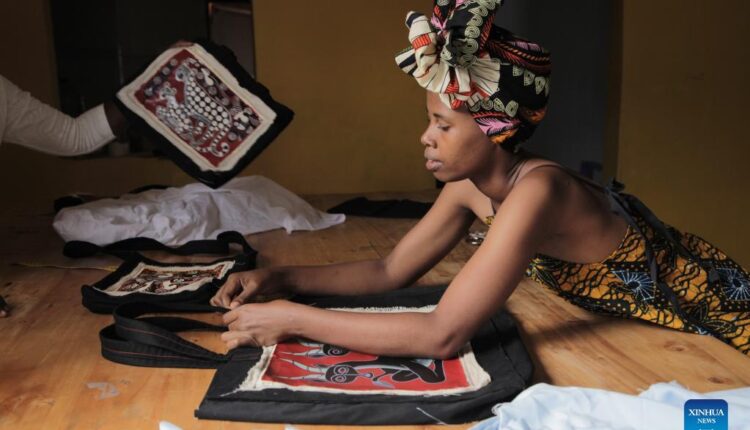 A Tanzanian woman designer is breaking the fashion ceiling with a style of her own thanks to her creativity that has taken her a fashion design journey of three years to achieve breakeven.

Upendo Minja, a 2016 graduate in procurement and supplies at the College of Business Education in the commercial capital Dar es Salaam, told Xinhua in an interview recently that she decided to blend her clothing design with the Maasai traditional wear and drawings of wild animals by Tinga Tinga Art to have a different look.

“My fashion design that comprise of the Maasai traditional wear and wild animals drawings such as giraffe and lions by Tinga Tinga Art is attracting tens of hundreds of customers, including tourists from across the world who visit Tanzania to see these animals,” said Minja who is also known as Rose.

Tinga Tinga Art is a unique and visually stunning painting style that was developed in the second half of the 20th century in Tanzania.

This kind of art began as a simple idea by using recycled, low-cost materials, like Masonite squares, ceramic fragments and bicycle paint.

And Maasai are a Nilotic ethnic group inhabiting northern, central and southern Kenya and northern Tanzania.

They are among the best known local populations internationally due to their residence near the many game parks of the African Great Lakes, and their distinctive customs and dress.

Minja, who works with Endelea, an ethical fashion brand founded in Milan in 2018 to create clothes and accessories in African wax fabrics with a made in Italy design, admitted to Xinhua that her three-year-fashion design journey has not been that rosy.

Behind the name Endelea, a Kiswahili word “to move forward, to continue without giving up”, Minja said there is a group of dreamers guided by passion and courage who believe in creativity, connections and empowerment.

Francesca De Gottardo, co-founder and chief executive officer of Endelea, said the goal of the fashion design company is to create collections that are able to mix Italian design with African fabric.

She said Endelea wants to support fashion designing in Africa by working with people in power and ordinary people by teaching them and passing skills on them.

Minja, a self-taught fashion designer, said the start of her fashion design journey was bumpy when three years ago she participated in the Swahili Fashion Week, Tanzania’s leading annual fashion show, but her design did not impress visitors to her pavilion.

“This did not discourage me but it persuaded me to improve. And this year (2021) I participated again in the Swahili Fashion Week and my pavilion attracted many customers from all walks of life,” she said.

She said she decided to do something more African but also with western touch by choosing the story of Tinga Tinga Art which is a very famous story and everybody knows it.

“I decided to collaborate with an artist from Tinga Tinga Art as I worked hard to improve my fashion design and make it a household name in Tanzania and beyond,” said Minja.

She said people like her kind of collection because she was the first designer to bring this thing into life combining the art.