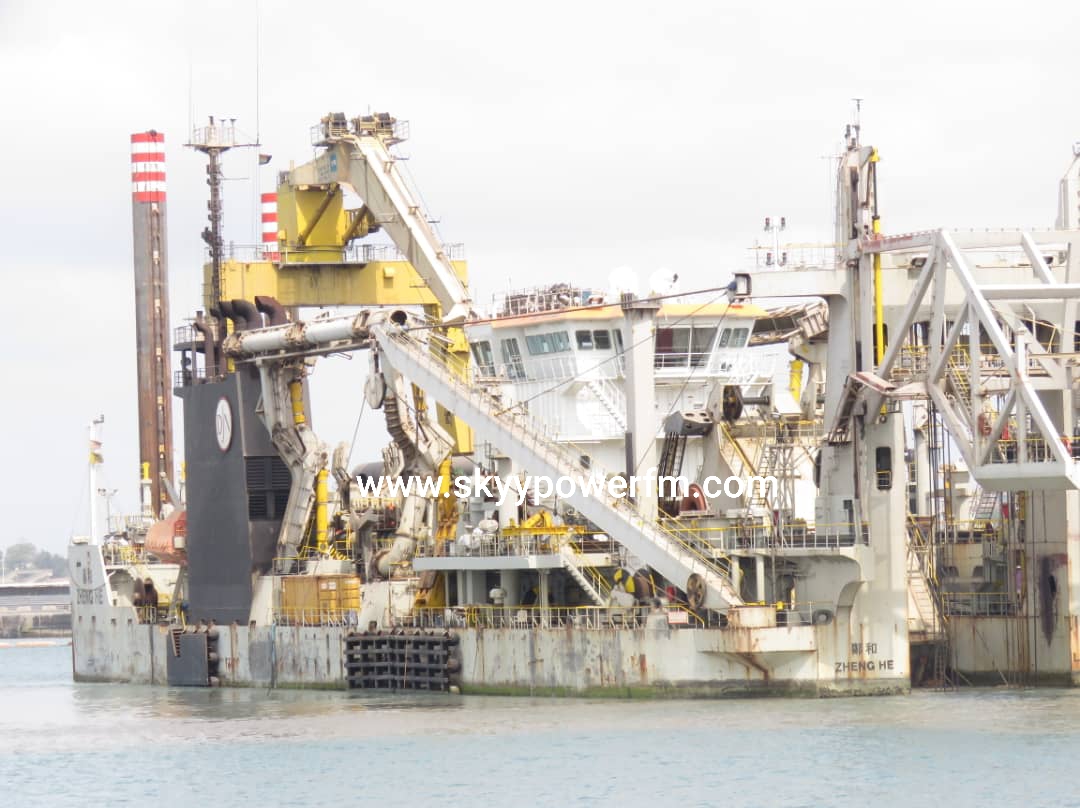 The Ghana Port and Harbours Authority with its partner IBISTEK [an indigenous Ghanaian Company] have commissioned dredging works, as part of a concession granted the latter, to construct the Takoradi Integrated Containers and Multipurpose Terminal christened; “Atlantic Terminal”.

A Cutter Suction Dredger (CSD) known as ‘CSD Zhen He‘ was also commissioned to execute this exercise. The CSD Zhen He is the second in the row of large self-propelled CSD; with a total installed power of 23,500KW, and a cutter power of 7,000KW.

It comes with a submerged pump power of 4,250KW, two Inboard pump power each  of 5,000KW. With the CSD Zhen HE, the Engineering, Procurement and Constuction (EPC), Jan De Nul, could dredge the sea basin at the port, to a depth of 35 meters. It comes with a Suction and Discharging pipe diameter of 900cm, that could collect hard material chop at the sea-bottom, and then discharge  to the reclamation area. The total amount under Phase I of this project to be dredged is approximately 1 million cubic meters, most of it in hard and very hard material, up to 65 Mega Pascal (MPa).

The dredging works when completed in Phase I of the project will have a berthing pocket dredged to a depth of -16m Chart Datum(CD) and the basin to 18.5 CD, to accommodate the 600m length of quay wall.

Project Manager of Jan De Nul, Kalin Andres scored that the pace of work has been impressive given the time they started. He assured of completing the dredging works by April this year.

“Dredging works will end by mid of April, 2020, that is, if no other variation will come during this period” he said.

Director of the Port of Takoradi, Captain Ebenzer Afadzie emphasized that, the exercise, is a critical component of the port expansion project, as stipulated in their concession agreement with IBISTEK/Atlantic Terminal Service, Ghana.

He envisaged the free movement of bulk cargo, and an improved port system, with the completion of the project. Captain Afadzie remarked that turn-around time at the port will witness a significant improvement, and thus guarantees shippers of a much efficient and reliable port operations, as the project completes.

“When you have container vessels coming, now they will not wait at the anchorage competing with break-bulk and bulk carriers that used to be the case. And definitely it will make them come in with ease.

“When the terminal is completed, we are not going to use the old ship-spreaders and cranes again. We looking forward to modern ways of handling containers, that is, ship-to-shore cranes and  the rest” he stated.

The entire project is worth half a billion dollars, with Phase I estimated at 210 million dollars. Jan De Nul, the EPC Contractor, according to the Chief Executive Officer for IBISTEK, Dr. Nana Sakyi, has within its terms, a provision to source local materials and services from the locale.

Most promising is the fact that, the project could guarantee of over 4,000 jobs for the Ghanaian people, especially for the oil city, Takoradi.

“We are projecting to hit about 4,000 at the peak and then we go into operations, which will bring in other people as well.

“If you look at the percentages, more than 70 percent will come to the local economy, even thought the payment was made to a foreign contractor” Dr. Sakyi emphasized.