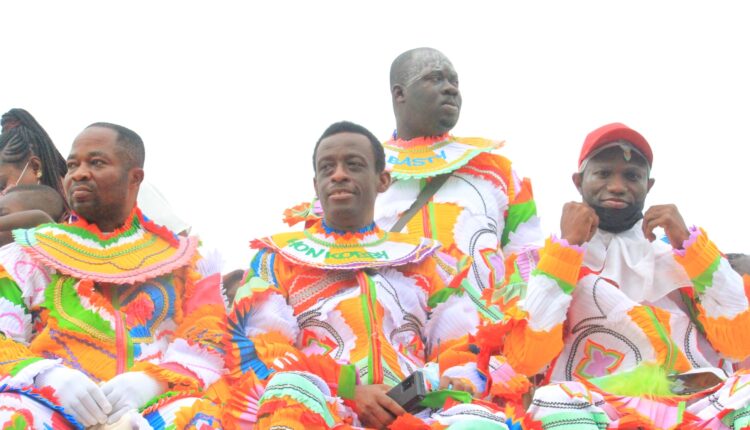 The Western Regional Minister, Mr Kwabena Okyere Darko-Mensah who is also the Member of Parliament (MP) for the Takoradi Constituency says Sekondi-Takoradi now holds the bragging rights to the famous masquerader’s culture in Ghana and they are not ready to lose it to any city.

He made this known to Skyy Power 93.5FM during the biggest masquerader’s event in Ghana, the Westside Carnival which attracted millions of viewership worldwide both physically and virtually making it the most talked about and popular cultural event during the 2021 festive season.

Explaining his reasons, he indicated that the masquerader’s culture in Takoradi which is over 60 years old has evolved to a much-advanced level and has been accepted by all classes of people in recent years, with over 10,000 individuals participating, unlike some 15 years ago when it was only perceived for “unserious individuals”.

He said, “Now, you will see doctors, engineers, business tycoons, lawyers, teachers, politicians, celebrities and people of different professions joining the masquerade bandwagon to have fun and that has changed the narrative, making it one of the most celebrated and popular cultures in the country.”

“Not only that, we have hundreds of people who travel from overseas to join the celebration including foreigners and this should let you know that the Takoradi’s masquerader’s culture is bigger than any in the country.”

Even though it originated from the Central Region of Ghana, Sekondi-Takoradi now owns it because theirs is more recognised and perfectly branded to suit international standards, the Minister made it known.

Also, since other places like Tema, Cape Coast, Agona Swedru and Winneba have adopted the masquerader’s culture, the Regional Minister is confident and has no fear that Sekondi-Takoradi will lose its bragging rights of the beautiful culture to any of these cities and towns.

Mr Okyere Darko further indicated that the Sekondi-Takoradi masquerader’s culture is now the blueprint of the modern version and before any other city or town can reach that level, they have already advanced further.