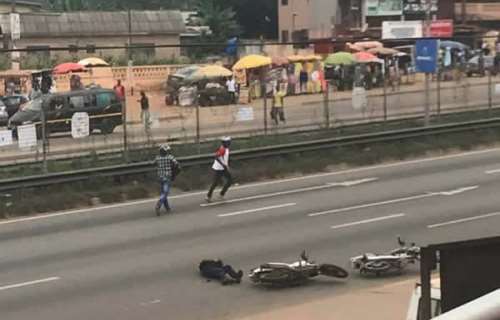 Information reaching Skyy Power 93.5FM is a robbery attack by two armed men on a couple at Amanful, around the Market Circle area in the Sekondi-Takoradi Metropolis on Monday afternoon, April 12, 2021.

It was reported that the two victims have just withdrawn money from the bank and the robbers, using an unregistered Royal motorbike followed them to the Amanful area near the Anaji taxi station, attacked and made away with their money. The money was intended to be used on some plumbing works which they were initially waiting for the plumber in the Amanful area before the attack.

According to an eye witness, the robbers attacked the couples and started assaulting the woman who had the cash in hand. They heard someone shouting and wondered what was happening. They initially thought it was a normal husband and a wife scuffle till they heard multiple gunshots. The wife was being assaulted with a gun which they struck her face multiple times till she was unconscious and the man who attempted fight back for the money was shot two times in the chest.

The robbers who were on a motorbike were wearing black jackets and black jeans with caps on gave warning shots in the air to scare people off from coming to the scene.

According to reports, the victims were taken by one of the taxi drivers at the Anaji taxi station to the Takoradi hospital to receive treatment but the husband died and could not survive the gunshot wounds.

The deceased, Mr. Charles Kwakye is a 61-year-old man who came from Accra to visit his sister in Takoradi, Sabina Annan with his wife. The bag that was taken is reported to contain the two passports of the couples and some foreign currencies including Ghana cedis as well.