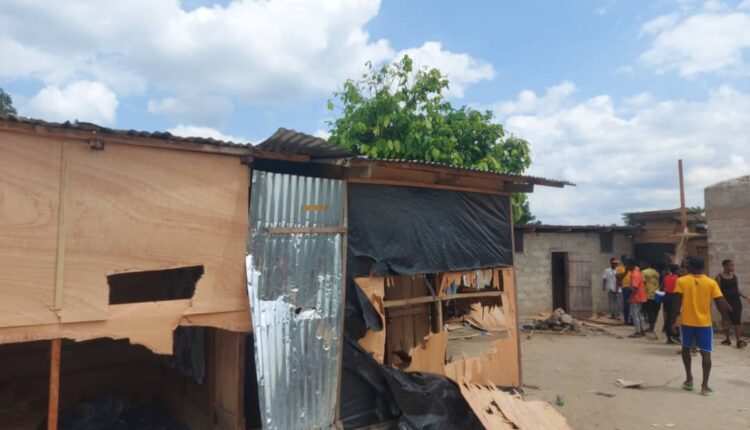 Mr Lord Nana Tandoh has led a team of a task force to tear down structures used as a brothel by commercial sex workers in the Amenfi West Municipality.

The sex working business that continues to grow in the municipality is dominated by Nigerians and they are mostly patronised by miners.

The Municipal Cheif Executive (MCE) said as part of developing the Municipality, a team of the Municipal Security Council (MUSEC) comprised personnel from the Ghana Police Service, Fire Service, National Security and Immigration Service ransacked and demolished structures of the suspected sex workers.

The structures mainly made of plywood, and polythene are situated in the heart of Asankrangwa, Aboi Nkwanta and Wassa Dunkwa.

Some residents told the told Ahobraseye FM’s Kaakyire after the exercise that, they are very excited about the action taken because their marriages were on the verge of collapsing and they could not guarantee their children of better future looking at the situation in the community.

The MCE Mr Lord Nana Tandoh added that their activities pose a security threat since no one can know what or whom they might be bringing to their places.

He again said, this will not a be a one-day exercise but will ensure that they deal with those people in such activities. He admitted that, we are ECOWAS State and know people from other countries will be coming into Ghana and places like this but not to get into activities that will put the future of our Children into danger.