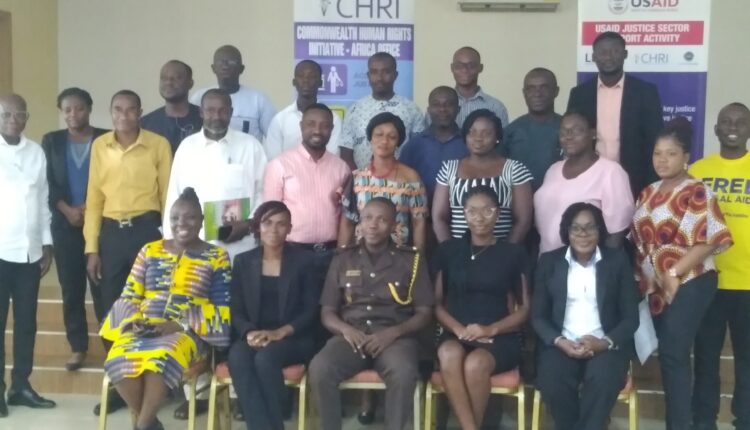 She said many petty offenders were often incarcerated because of their inability to pay fines imposed on them by the courts for committing petty/minor offences, which fell under a misdemeanour.

Madam Mensah was speaking at a stakeholder’s roundtable in Kumasi on the need to review the ADR Act and the Legal Aid Commission Act, to allow some petty/minor crimes to be resolved through ADR.

That, she noted, would not only ensure the poor access to justice in a friendlier and timeous manner but also reduce congestions at the courts, overcrowding in the prisons and discourage the over reliance on custodial sentences that left the complainants mostly unsatisfied because they were neglected in the prosecutorial process.

The event was organised by CHRI, an implementing partner of the USAID Justice Sector Support Activity.

It was to strengthen the Case Tracking System (CTS) through citizen engagement, empowerment, and the voice to demand accountability and improve services.

With funding from the United States Agency for International Development (USAID), the project also sought to eliminate injustices in Ghana’s criminal justice system through several interventions.

Madam Mensah said the poor and marginalised continued to suffer imprisonment in cases that could be resolved amicably, thereby contributing to overcrowding in the prisons.

“When we are talking about minor offences, it is normally the poor who have problems when they commit such offences and are supposed to access justice,” she said.

She charged the participants to share their experiences and perspectives on how best to review the two Acts to improve justice delivery in the country.

Ms Esther Kumah, the Administrator, Ghana ADR Hub, said using ADR mechanisms to resolve petty/minor cases was critical to effective justice delivery because it would ease the burden on the courts and reduce prisons’ overcrowding.

“We are looking at Victim Offender Mediation, which is a subset of restorative justice as the preferred ADR process for the resolution of petty criminal offences. What we aim to achieve is that the victim gets involved in the dispute resolution process and the reintegration of the offender into the society,” she noted.

She bemoaned the low level of public education on ADR and applauded the CHRI and its partners for spearheading the campaign for the public to embrace the concept.