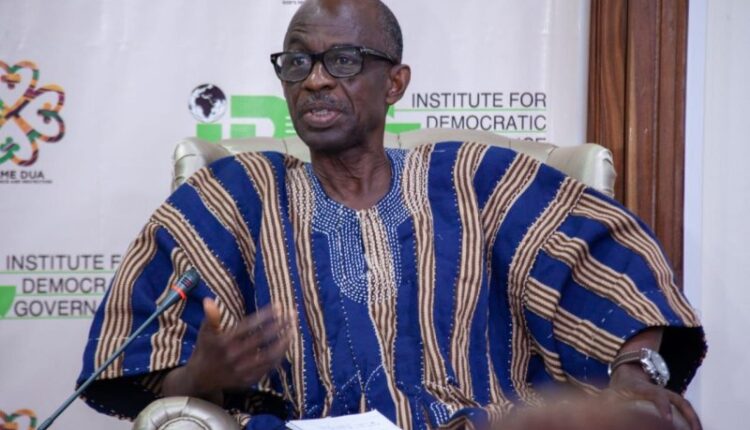 Stakeholders in governance have called for the deepening of democratic norms, especially the rule of law, equity and inclusiveness, to build confidence in the governance system and ensure equal opportunities for citizens.

They advocated strong and effective institutional structures to deepen Ghana’s democratic process and restore citizens’ trust in the various arms of government.

At a roundtable on “Sustaining Democracy in the Context of Erosion: Lessons from Europe and Africa,” the stakeholders said there was the need for Ghana to live up to the accolade of being a beacon of hope in terms of democratic governance and sustenance in Africa.

It was organised by the Institute of Democratic Governance (IDEG), in collaboration with the Centre for Democratic Development, and the Danish Institute for Parties and Democracy (DIPD), in Accra on Friday.

Mr Johnson Asiedu Nketia, the General Secretary of the National Democratic Congress (NDC), said among the challenges affecting the country’s democratic practice was the lack of capacity to build public institutions to effectively perform their checks and balances roles.

The manner in which persons elected into the highest offices became dictators and autocratic, thereby manipulating and controlling state actors and institutions, was hindering Africa’s governance systems and economies, and Ghana was not an exception, he said.

“Africa has gone through coups, union governments, party politics…. and finally to multiparty democracy, which has been widely accepted as the best option. However, democracy is not a destination in itself but must be nurtured and built upon to ensure sustenance and restore confidence, especially in the youth,” Mr Nketia said.

“Africa is experiencing emerging youthful populations, who are beginning to question whether the democracy being practised can deliver the goods. Some even think it’s deceptive as it hardly responded to the needs of the marginalised.”

The NDC General Secretary attributed the challenges of governance partly to the winner-takes-all situation, where elected governments appointed public officers, who appeared to satisfy their (governments) interests, to the detriment of the state.

He said he disagreed with the school of thought that traditional authorities should be allowed to participate in active politics because they held reputation and power, which enabled them to mediate effectively in times of conflict.

The framers of the Constitution discouraged traditional leaders from active politics in order not to allow any person(s) to tarnish their image since they served as mediators anytime political parties “misbehaved,” he said.

Dr Emmanuel Bombande, the Senior Mediation Advisor to the United Nations, said the increasing violence that had characterised Ghana’s elections, in recent times, was worrying as it undermined the progress of the country’s
democratic practice.

He attributed the phenomenon to the lack of political will to equip and empower institutions responsible for educating the populace on violence-free elections, taking control of their organisations and acquiring the resources to deliver on their mandate.

To promote good governance, Dr Bombande advocated tolerance of opposing views among political parties, consensus building, and the creation of opportunities to the benefit of the people, especially women and the youth.

Mr Akwasi Osei Adjei, a former Minister of Foreign Affairs and Regional Integration noted that the current system of governance “seems to empower any elected leader to marginalise the people, even if they have the capacity to contribute meaningfully to the wellbeing of the State.”

He called for the review of the 1992 Constitution to allow everybody, including chiefs, to participate in the governance system to strengthen the democratic principles of the state.

Mr Adjei suggested a Second Chamber of Parliament, composed of chiefs, to serve as checks and balances on the various arms of government.

Ms Lisbeth Pilegaard, the Executive Director, DIPD, said there could not be democratic rule when sections of society felt excluded, adding that all must be supported, especially women and the youth, to participate effectively in democratic governance to erase the perception of exclusion.

Dr Lawrencia Agyepong, a Lecturer at the Ghana Institute of Journalism, said the internal political party wrangling, being witnessed in the country recently, was troubling hence the leadership must ensure the governance structures worked to build confidence in the citizenry.