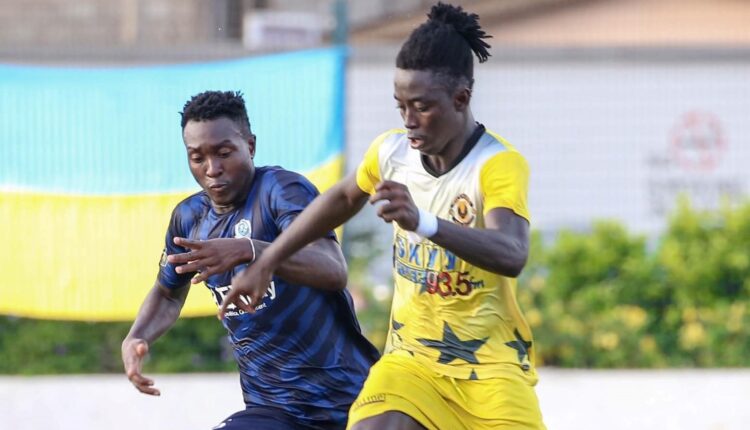 SOLOMON OHENE NIMO(8): He kept his cool in the 90mins and made sure Salifu Rauf and Dominic Nsobilah’s combination upfront was nullified. Communicated very well with his back-line but his greatest test was in the extra time where Accra Lions forward Fawzan Dandawah shot at goal and he was equal to it.

MARTIN OWUSU ©: (7) The ever-reliable captain was tested throughout and was made to over-work. But he was the reason Accra Lions winger Hagan Frimpong was substituted in the second half. He linked up very well with the midfield and that proved vital.

ISAAC AFFUL(6.5): The highlight of his game was the expertly taken free-kick in extra time which resulted in the goal. Besides defensively he was solid.

RICHARD DJAN( 9): His Van Dijk-Esque style caught the eyes of many and was a constant threat in the air and monstrous on the ground. Cleared every mess and sparked fear into the forwards of Accra Lions especially on dead-ball situations. A boy is truly a man.

EBENEZER ACQUAH(7): Kept his cool throughout, his game has really improved. His understanding with Richard Djan is the one to look out for in the upcoming Division 1 season.

ABDUL KAREEM NURUDEEN(8.5) His Gazza style is reminiscent of Paul Gascoigne. Very cool on the ball but aggressive with his retention. Solid throughout.

VICTOR EGHAN JNR(5) The earlier booking slowed his game and was changed afterwards. He needs a bit of aggression.

BABA MUSAH AMANDO(9) Truly the first half wasn’t meant for him but he warmed himself in the game and his magical feet sent the Lions defense into dissaray manier times. Quick thinking,quick feet, truly he has arrived. Got the goal,solid.

EBENEZER MAMATAH(7) His strength was always a threat but didn’t clicked into gear. His movement constantly off. Subbed in the 2nd half. But truly a fox in the box.

EMMANUEL ESHUN(9.5) Warmed himself in the second half, and got the Lions laterals of the wheels. He created many openings and was the reason for the vital free-kick which eventually won the game. His never say die attitude is his arsenal.

SHAIBU TAHIRU(6) Came on to stabilize the midfield.

ERNEST OWUSU(6.5) Proved everyone wrong with his cameo appearance.