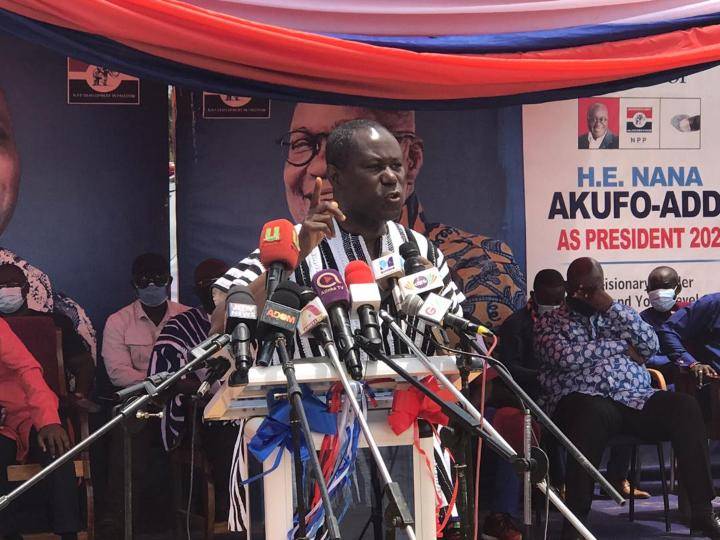 The Chief Executive Officer for COCOBOD, Joseph Boahen Audio has instructed that former President John Dramani Mahama refrain from politicizing cocoa issues in the country. In what could be described as a nauseating reaction to recent criticisms by the former President, Mr. Boahen Audio advised that John Mahama takes an introspection of how badly the cocoa sector was managed under his administration before he runs any commentary let alone criticise the Akufo-Addo government.

Addressing chiefs and people of Wassa Atobiase in the Wassa East Constituency, the COCOBOD CEO argued that John Mahama is a ‘novice’ when it comes to cocoa issues. Mr. Boahen Aidio added that his [John Mahama] administration is to be blamed for the escalated swollen shot infestation that has ravaged several thousands of cocoa plantations and thereby affecting the country’s production capacity.

“He must shut up. He shouldn’t have said anything about the cocoa sector. It’s rather shameful to hear him speak on cocoa issues. We had our plantations infested with swollen shoot disease. And ask why this happened. The Mahama administration had little knowledge about how to deal with it… They were just massaging the problem…no hope for the farmer,” he angrily stated.

His comment was provoked by a recent backlash by the former president on government that the cocoa sector is a fall due to the mismanagement of initiatives his administration introduced.

But Mr. Boahen Aidoo stressed that but for President Akufo-Addo, the cocoa sector could have been ‘wiped out’ by the swollen shoot virus.

He added that, for the innovation of the Akufo-Addo government, farmers are guaranteed better value for their produce. He noted that the government has rolled out a Cocoa rehabilitation program, which offers enhanced financial and technical support for farmers to regrow their crops.