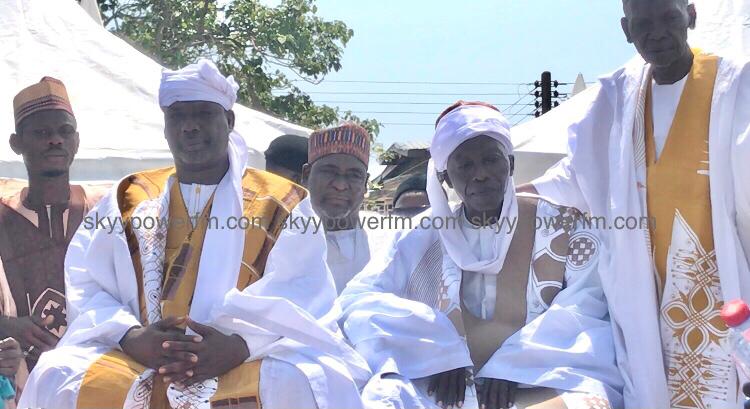 Sheik Zulkifil Abdul Wahid Umar who is been promoted automatically and turbaned as the chief imam served as a deputy chief imam under the late Alhaji Sanni Abdullah for only 4 months.

The colourful ceremony was well attended by dignitaries from across the country as well as the Muslim communities in the western region signifying the strength and unity among them and the acceptance of the newly turbaned chief imam and his deputy.

Leader of the Shia community in Ghana who doubles as the Zongo Chief of Tamale, Sheik Dalhu Abdul Mumin who was the special guest for the occasion cautioned Sheik Zulkifil Abdul Wahid Umar and his deputy to ensure that Allah’s command would reign supreme among Allah’s people and also ensure that they bring all together to show love to the holy prophet of Islam since that is the way to lead us to peace, harmony and co-existence among ourselves.

“I want the imam and the deputy to know that the whole world today is in serious confusion, no one is happy with what is going on in the whole world and Ghana is part of the world. The world at large is in serious confusion economically, socially, and politically so when you question any person about the reason for that, he will find it difficult to explain; no one understands what is going on so we are telling them to understand that God almighty created the world and he owns it”.

“According to Islamic teachings, he created the world because of the holy prophet of Islam, he loves him so much unfortunately the world is not showing that love and concern to the holy prophet of Islam so Allah decided also to leave us this way so for us to be able to come out of this problem we need to reflect back to love the one that the almighty love and we will be happy”.

Reading a speech on behalf of the Western Regional Minister, Dr Kwabena Okyere Darko-Mensah, the Mayor for Sekondi-Takoradi, Abdul Mumin Issah assured the newly installed chief imam of the Government’s support and that of all the administrative heads in the western region to his reign as the chief imam in the region.

He however entreated the Muslim communities in the western region to rally behind the president because and trust him to deliver his best to the country in these difficult times.