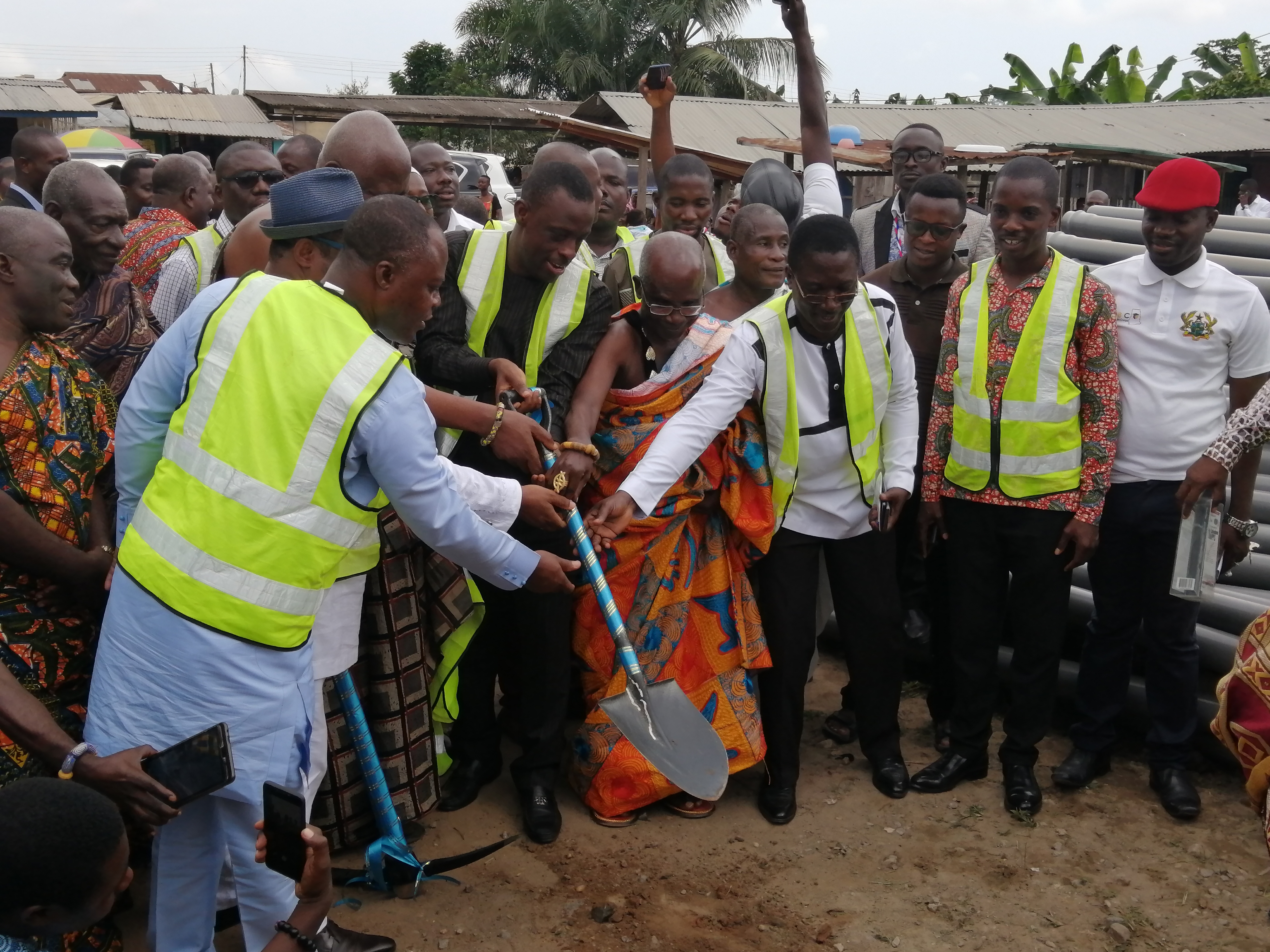 Residents of Supomo Dunkwa in the Shama District would soon have a sigh of relief, as a 4.5 kilometer water pipeline extension project has been initiated. The four inches pressure pipeline will be laid from the Daboase water treatment Plant to Supomo Dunkwa, in Phase I, and further extended to Asamasa No.1 in Phase II.

The cost of the project is GHC 580,907.19 is being borne by the Ghana Water Company Limited (GWCL). This initiative was being championed by the Member of Parliament for the area, Hon. Dr. Ato Panford, as a fulfillment of a campaign promise made to the people.

Speaking at sod cutting ceremony on Monday 26 August, 2019, in Supomo Dunkwa, Hon. Dr Ato Panford cried that the community has for many years been without portable clean water despite living along the Pra River. He disclosed that the project was pursued aggressively since his election, in a bid to alleviate the plight of the community.

“Indeed because of the distance, where they would need to extend the whole pipelines to this community, everybody shy off from this kind of project. But then, I told the people of Supomoman by grace when I’m voted as Member of Parliament, I will ensure that live basic thing-portable clean water, they should be available to have access to it” he explained

He promised to address other basic needs of the people in due time.

“We are here to take very good care of them, especially water, education and health care” he said.

Acting President of the Shama Traditional Council, Nana Kwamina Weinu II remarked that it was ironical to have a community along the major water source lack portable clean water. He mentioned that their denial since “independence” is saddening as residents have had to drink, wash and bath in polluted water in the Pra basin, and dug wells which are often hard.

He commended the Member of Parliament, Hon. Dr. Ato Panford for making this a reality.

Communications Manager for the GWCL, in charge of Western and Central Regions, Nana Yaw Barnie disclosed that the project would be executed by four construction firms; Zigma Engineering, Ewonak Enterprise, Asemabapa Company Limited, and Trusling Company Limited; over an eight weeks schedule.

He noted that the necessary logistics have already been procured to expedite work.

A community water treatment system was constructed by the previous administration to address this water crisis, however due to the salinity of the water abstracted from the wells, the residents couldn’t use it.

District Chief Executive for Shama, Hon. Joseph Amoah disclosed that almost a million Ghana Cedis was expended in that project, followed by a series of testing and treatment all in an attempt to make the water drinkable and usable.

“When we took over, we learnt the water wasn’t good. We had a couple of meetings with the project consultants, contractors- installed some purifiers so as to make this water drinkable but all failed. The report that came was that the water was hard and undrinkable” he noted.