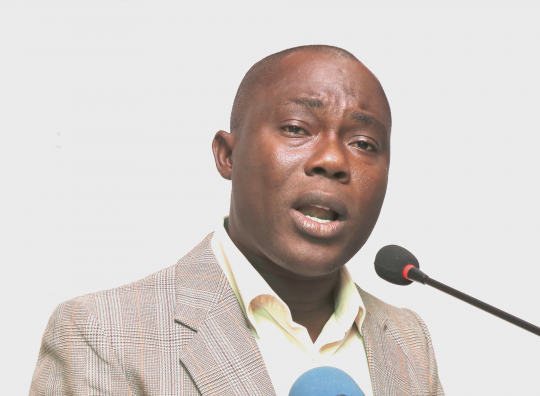 ”#SexForGrades saga : there are people behind attempts to embarrass me” Says embattled Professor Gyampo

Beleaguered political science lecturer at the University of Ghana, Professor Ransford Gyampo has claimed some unseen hands are behind what he describes as attempts to embarrass him.

In a video that has since gone viral, the Head of European Studies at the country’s premier university allegedly offers to marry to a female undercover journalist posing as a student. The undercover journalist had posed as a graduate seeking to do a study on a subject she believed the Professor was well read and for that matter, knowledgeable on.

Having agreed to mentor to the reporter, the Lecturer called the ‘student’ a few weeks later and asked to visit her one Sunday afternoon. However, the undercover journalist declined and instead convinced him to agree to a meeting at ”the mall”, according to the BBC’s report.

Speaking for the first time on the matter, the beleaguered Prof. believes there are people behind the screens pulling strings to embarrass him.

“How do you talk about sex (for grades when it is…) between a lecturer and somebody who is not his student? And so it is misleading and I explained the circumstances to them but it seems to me that there are people behind the screens trying to pull the strings just to be able to embarrass me and all that. Because if you speak to the BBC, they tend to understand your point of view” he said.

Professor Gyampo also revealed he had written several letters to the BBC to explain himself but the British Broadcaster did not factor any of that in their reportage.
”I have written extensively (on this issue). I have written three letters to them, raised a lot of points with what they were seeking to do but someway, somehow they decided not to factor anything that I have said in this letter into their own reportage and the people that they were supposed to speak to. We had conversations here with my assistants in the office and it’s like they are bent on pushing a certain angle just to be able to embarrass me and I can understand because this is not the first time” he disclosed.

Meanwhile, Professor Ransford Gyampo has threatened to sue the BBC for defamation. He told Accra based Though he had initially opted to “leave the matter to God,” he told Citi News that his lawyers convinced him to pursue legal action against the BBC though it was not his initial thought.