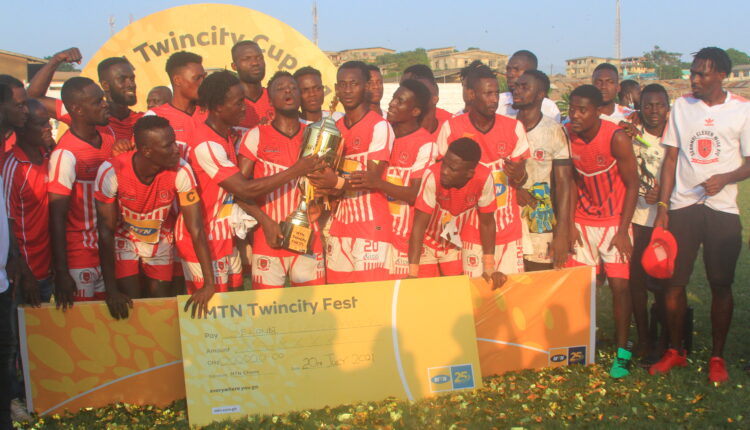 Tuesday, 20th July, was marked as Eid holiday nationwide but in Sekondi-Takoradi, it was a day for the MTN 25th anniversary Twin City fest cup featuring Division One League club, Sekondi Hasaacas, and Division Two League club Sekondi Eleven Wise. This was a memorable local derby.

The build up for this special match saw massive media attention following the official launch on the 7th of July, the excitement for this old tradition not experienced for past four years, started boiling with Hasaacas supporters teasing Eleven Wise that they were contemplating fielding their female team, Hasaacas Ladies to subdue the show masters because they are no longer in their class.

Fast forward to Match Day, this local derby did not disappoint in terms of patronage on air with almost all Western Region FM radio stations and New Day TV broadcasting the event live, online on MTN Facebook wall, StarTv, and NewDay Facebook wall on top of restricted numbers admitted at Gyandu Park.

On the pitch, this local derby started with players showing a lot of nerves. In the opening minutes of the game, Hasaacas were slightly ahead,. But when Sekondi Eleven wise settled after the 15th minute, momentum swinged with the Show Masters taking control of the midfield and dominating attack until they took the lead.

The first goal was scored from a corner kick which was flicked by Wise attacker Frank Owusu Ansah. After the recess, Hasaacas returned more determined to cancel the lead.

After the equaliser, the youthful Sekondi Eleven Wise midfielders became animated, frantically trying to open up the resolute Hasaacas experienced defensive wall to find the winner. Maturity was in the way of ambition of the Show Masters.

The game went into penalties after the pulsating 1:1 regular play time outcome which could not decide who would lift the MTN 25th Anniversary Cup and walk away with the bragging rights for a year.

During the penalty kicks, ironically the Hasaacas goal scorer Ibrahim Sanah and the potential most valuable performer of the day, Captain Abeiku Ainuson saw their kicks hit the bar of the poles and not entering the net.