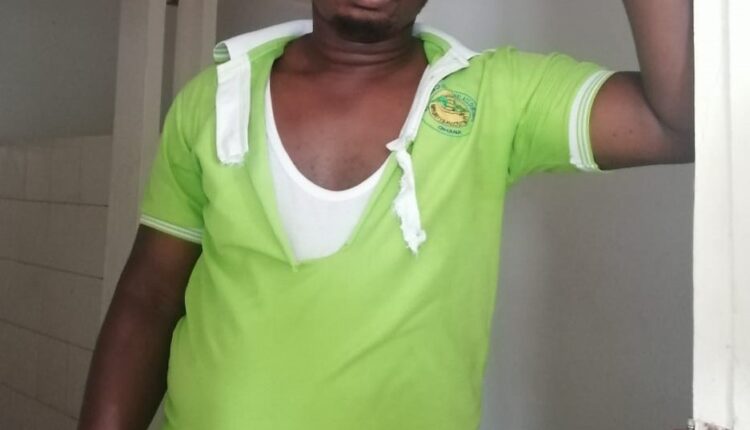 The General Manager of Skyy FC, Paul Anyaba has been physically assaulted by the fans of Samartex FC at Samreboi, in a match between Samartex FC and Skyy FC on Thursday, April 29, 2021.

The match between Samartex and Skyy FC was scheduled on Wednesday, April 28, but was later postponed due to heavy rains making it inconvenient for the match to continue on the 30th minutes. The match which was later scheduled for Thursdays, April 29, became chaotic when some fans of Samartex FC decided to launch an attack on some members of the management of Skyy FC.

The General Manager, Paul Anyaba speaking on Skyy Power 93.5Fm narrated the ordeal making it known it was an unprovoked attack launched on him by the fans of Samartex. In the interview, he made it known he and 4 other staff of Skyy FC were sitting at the VIP when a penalty was awarded to Skyy FC which some fans of Samartex began to protest the call.

However during the protest, he gave orders to one of the coaches of Skyy FC to be given to the players. After he was done with his instructions and getting back to his seat, about 10 fans pounced on him in an unprovoked attack.

He said, ” When we had the penalty at first, the opponents started to protest which I didn’t want the Skyy FC players to stand idle, so I told one of the coaches called Ansah to let the players warm up in the mid of the protest. After I was done with what I was saying and going back to my seat, one of the fans attacked me which about 10 others joined in the attack.”

“After they have attacked me at the VIP stands, I left to the dressing room to clean myself. Then I heard some noises which I saw the same group of attackers coming at me at the dressing room. They attacked for the second time in the dressing room which some players of Skyy FC came to my rescue from the fans. This ordeal made the game delay for about 40 minutes because we feared for our safety and did not want to continue the match.”

Audio: Paul Anyaba gives full account of the atmosphere and the happenings at the stadium:

Also, Paul Anyaba added the management of Skyy FC have petitioned the Ghana Football Association concerning the incident as they will want the necessary action to be taken against Samartex FC.