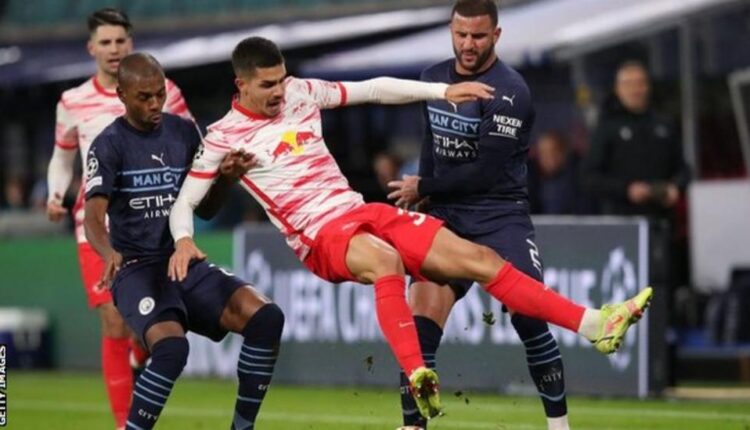 Manchester City boss Pep Guardiola says he hopes Kyle Walker learns from a red card in the Champions League defeat by RB Leipzig that “hurts” his side.

City were already assured top spot in Group A before a 2-1 loss in Germany.

But England defender Walker was sent off for hacking out at Leipzig forward Andre Silva with eight minutes to go and will now face a suspension.

“Kyle Walker is an important player for us and it is unnecessary to lose him like this,” said Guardiola afterwards.

“I hope he learns from this. The red card hurts us, especially for the round of 16.

“It’s a red card, definitely. I’m not coming here to say what happened in the dressing room.”

Riyad Mahrez headed in for City from Oleksandr Zinchenko’s cross with 14 minutes remaining but Walker was then dismissed for kicking Silva on the back of the leg.

“In the first half we lacked rhythm. We had problems in contact and they have a really good team – we knew that from before,” said Guardiola.

“The second half was much, much better. We were more aggressive, we played to win the game but, unfortunately, we made one or two mistakes and they punished us. We lost. Congratulations to Leipzig.”

He added: “But in general we made an incredibly good group stage. We qualified with one game left from a tough group, so I am more than satisfied with the performance in every single game.”

City also picked up a couple of injury concerns, with Guardiola saying defender Nathan Ake has a problem with his back while midfielder Phil Foden was taken off as a precaution because of an ankle issue.

MTN FA Cup finals lived up to its expectation –…

I can’t be an ambassador for Hasaacas – Kofi Kinaata

Prices of petrol and gas to reduce by 8%, 7%, but diesel to increase