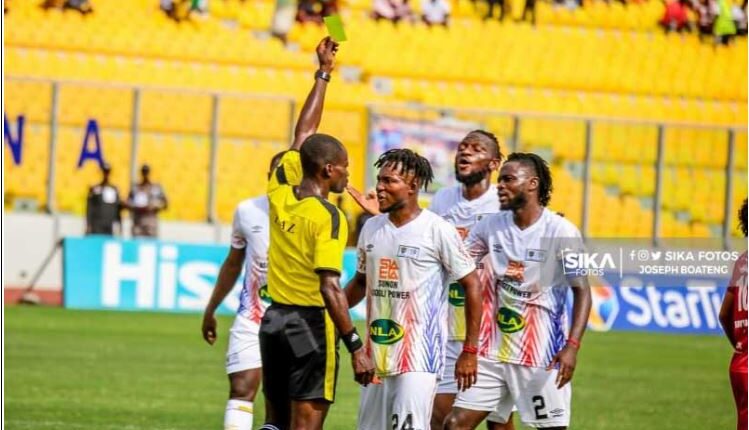 Referee Padi banned for remainder of the season over Kotoko penalty

Referee Joseph Kenny Padi has been suspended for the rest of the Ghana Premier League season after the Ghana Football Association’s (GFA) Match Review Panel decided that he erred in awarding a penalty to Kumasi Asante Kotoko in a matchday 24 match against Accra Hearts of Oak.

The Panel concluded that Referee Padi erred in awarding the penalty which changed the outcome of the match and resulted in a 1-0 victory for Kotoko.

Padi has also been suspended from officiating all GFA organized matches.

The complaint accused Referee Padi of awarding a dubious penalty to Kotoko when Heart’s defender, Nurudeen Abdul-Aziz won a 50-50 ball in the 18-yard box from Kotoko playmaker Fabio Gama.

At the hearing, referee Padi reportedly insisted that Abdul-Aziz stepped on the foot of Fabio Gama but later agreed that there was no stepping on the foot of the Brazilian after watching the video.

The GFA statement said the referee then, “defended that there was a push and pull at a point, which the video clearly showed that it was not the case”.

Grounds for the decision

The Panel after reviewing the video concluded that there was no foul committed which warranted any penalty.

“The hand on the back of the attacker had no impact on the attacker. More so the attacker should not have fallen backwards if the fall was because of the hand of the defender, obviously, it was not a push so falling backwards suggests a premeditated attempt to fake a foul,” the Panel concluded.

The Panel also considered other factors:

• If there was pushing as claimed by the referee, we did not see any movement of the arm from the back to forward. Meaning no HAND MOVEMENT

• Neither pulling movement from front to back.

• The attacker was already throwing himself down in a completely strange way.

• If there was pulling or pushing as claimed by the referee, the attacker should have fallen on the face and not with his back as seen in the video. (FOOTBALL UNDERSTANDING)

The Panel said the video also showed quite a number of inconsistencies in Referee Padi’s decisions during the match, especially after the penalty incident and attributed it to a loss of concentration.