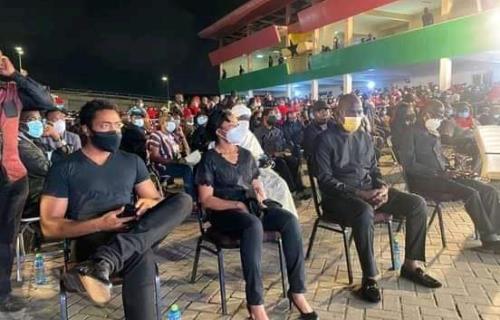 The family of late former President Jerry John Rawlings Thursday expressed gratitude to the Government and people of Ghana for the befitting state funeral and burial accorded their kinsman.

Mr Rawlings, who was Ghana’s longest serving leader, died at the age of 73 on November 12, 2020 at the Korle Bu Teaching hospital where he was receiving treatment. He was buried at the Military Cemetary in Accra after an elaborate state funeral on January 27, 2021.

At a call on President Nana Addo Dankwa Akufo-Addo at the Jubilee House, Accra, a delegation of late Mr Rawlings’ family led by Ambassador James Victor Gbeho, said they were grateful to Government and Ghanaians for the love and support extended to them during the demise of their beloved.

They particularly thanked President Akufo-Addo for his personal commitment and involvement in ensuring that the former president was given a befitting burial.

“It is true that you were doing what was expected of a president, but in many ways we saw and were convinced that you went a little beyond your duties in ensuring a fitting farewell was given to former President Rawlings.

“Your interest from day one when the family came here to inform you officially about the passing away of the former president, your reaction to it, we listened very carefully to your broadcast that same evening and the fact that you took a quick decision to give him a state funeral. We are very grateful for that,” Ambassador Gbeho said.

Ambassador Gbeho also expressed the gratitude of the widow of late President Rawlings, and the entire family to the Chief of Staff, Akosua Frema Osei-Opare and officilas of government for the support offered the family during those difficult moments.

“The widow who has gone through a terrible time is particularly grateful to you for the interest that you showed in the funeral of her late husband.

“We join her in conveying not only the gratitude of the former first lady but also the whole family would like to say thank you to your staff.”

President Akufo-Addo who paid glowing tribute to the contribution of late leader to Ghana’s development, told Mr Rawlings’ family that the state owed it a duty to give him a dignified send off.

He was gratified that the host of Ghanaians and dignitaries who took part in the funeral ceremony were pleased with the outcome.

The President assured the family of his, and Government’s readiness to lend further support to them.

“Whatever can be done to assist to support the wellbeing [of the family], I am prepared to do my part, “ he said.