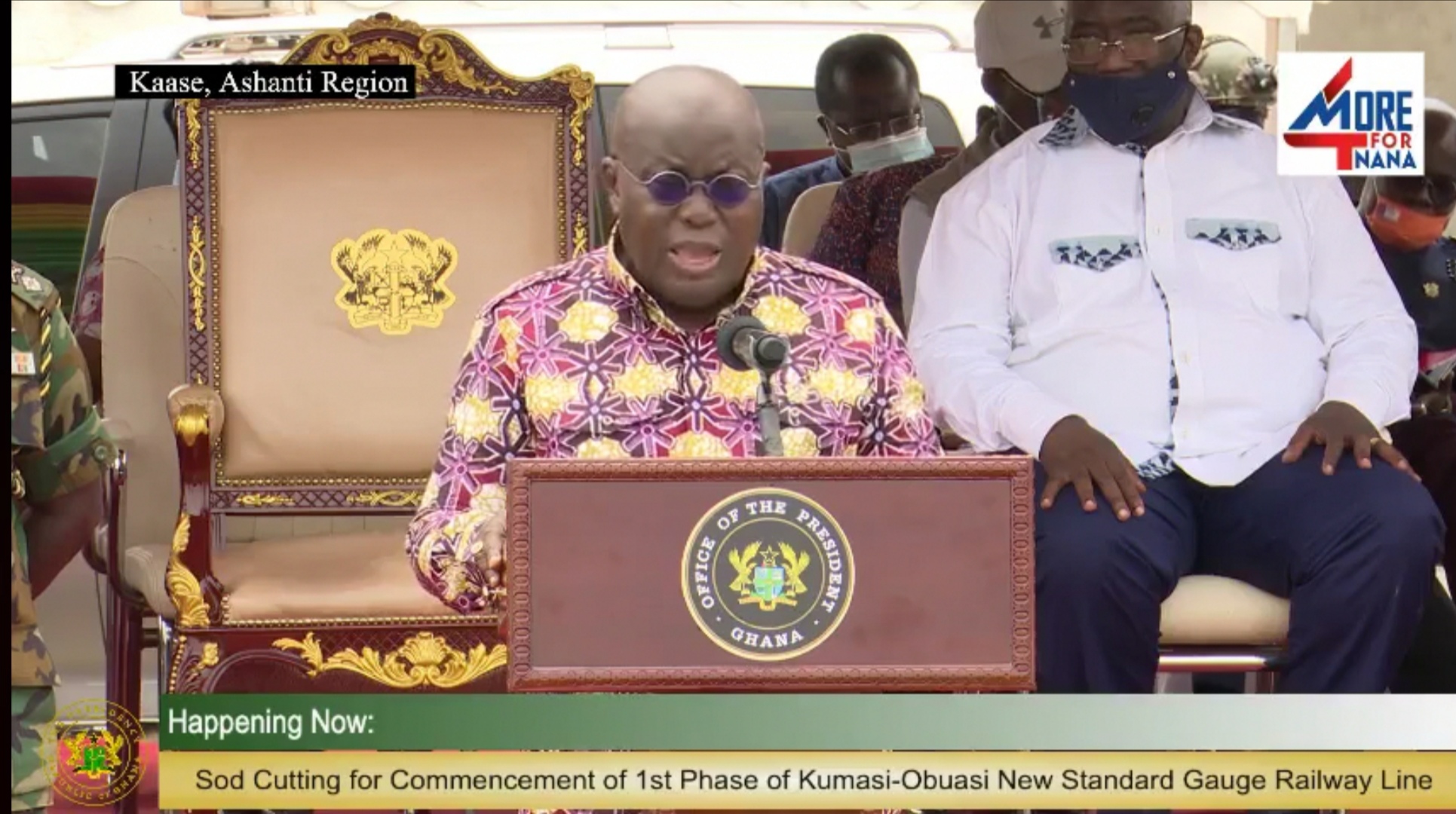 President Nana Addo has cut the sod for the construction of an 83.5-kilometer rail line between Kumasi and Obuasi. The project which is being executed by Walter Walter Ghana Limited will add to the existing rail connectivity on the Western Rail Line.

Speaking at a groundbreaking ceremony in Kaase in the Ashanti Region, President Akufo Addo noted that the project is being financed by a $500 million facility that the government approved recently for the development of a standard gauge rail line and redevelopment of the Western Rail Lines. He added that such investments fall within the government’s agenda of integrating the exploration and mining of mineral deposits in the Sheini and Oppong Manso.

“Once completed 102 kilometers of a new standard-gauge railway line would have been constructed as part of the development of a new standard gauge Western Line. Indeed, the Kumasi to Obuasi section which I am cutting sod today is part of the new western line. This line is critical for the successful establishment of the new bauxite and aluminum industry being promoted by government.

“The Sheini and Oppong Manso iron ore deposits exploitation which will form the basis of the imminent iron and steel industry requires a modern railway network to transport the ore and the processed raw material,” the President emphasized.

He disclosed that the contractor has assured of completing work within budget and on schedule.

Work on the Boakra Inland Port, according to President Nana Addo will begin in earnest as a sod-cutting ceremony is scheduled for November this year.

President Nana Addo indicated that parliament has already approved a $330 million concession for the development of the project, which has been pending for more than two decades. He mentioned that the railway development within that corridor would be key infrastructure to the operations and development of the port.

“…its economic viability will be greatly enhanced by the presence of a railway line.”

He added that his government has prioritized investment for the development of modern rail infrastructure across the country.

President Nana Addo hinted that the government will before the close of the year sign a contract for the construction of a new standard gauge line from Tema through Accra to Kumasi. This he stressed “is a must.”

“…and I  expect a contract to be signed before the December elections.”

He added that designs and feasibility studies for the project have been completed.

“As many of you may know, the country’s railway network has never gone beyond Kumasi. That is why I am happy to announce that the feasibility study and preliminary designs for a standard gauge line from Eduaben, through Bechem, Sunyani, Techiman and then Tamale has been completed.”

Final stakeholder consultation for the project will commence next week followed by the processing of land acquisition for the rail lines, the President added.